Autumn has now begun. It is actually the only one of the four seasons that polarizes. Many people enjoy autumn while collecting chestnuts, drying leaves and long walks through the rustling leaves. However, there are also people who do not like the transition to winter at all. They feel the nasty, cold, damp darkness practically in every cell. Many people experience the so-called autumn blues. Sunlight, or rather the shortage of it forms the basis of this malaise.

Sunlight is our most important clock. It daily synchronizes our internal clock, awakens us and provides drive and energy. As the days get shorter and the nights longer, the outer clock is no longer in sync with our inner clock. As it gets dark early in the evening and bright late in the morning, your energy levels drop. That is how the annoying autumn blues comes about. We were just able to enjoy the last rays of sunshine and suddenly when the leaves on the trees change colour, many people also discolour.

The lack of light during the grey days can change our hormone balance. During the summer our body produces a lot of serotonin and little melatonin. In autumn and winter it is the other way around. Serotonin is a messenger molecule (neurotransmitter) that transmits information in our nervous system from one nerve cell to another. In addition, serotonin occurs in our platelets (blood plate) and in large quantities in special cells of our gastrointestinal tract. Therefore, it controls many different processes in our body, such as body temperature, appetite, emotions, reward, mood and drive, sleep-wake rhythm and pain evaluation. Serotonin is better known as "feel-good hormone".

Melatonin is the antagonist of serotonin and also known as sleep hormone. Its production is inhibited by light and increases in the dark. Thus, melatonin is only released when the internal clock is set correctly and the external circumstances are appropriate. However, if daylight lasts only a few hours, like in autumn and winter, the level of melatonin remains elevated during the day. As a result, fatigue and sleep disturbances can occur.

In addition, Canadian researchers from the University of Toronto discovered another puzzle piece in the interplay between the seasons and our state of mind, namely the transporter protein 5-HTT in our brain. In summer only very little serotonin and in winter a lot of serotonin is transported out of our brain by 5-HTT. In addition, our body produces more melatonin in the dark season. No wonder we are in a bad mood and constantly tired!

Luckily you can do some things to get rid of the autumn blues!

1. Lots of exercise in the fresh air

Even if it is much cosier inside, get yourself up and go outside! Because in autumn, the lack of light is so depressing. So refuel as much light as you can to get serotonin production going. Let the wind blow around your ears for at least 30 minutes.

It is not without reason that there are living creatures that retire for hibernation. Don’t you also feel like hibernating the cold season? Then maybe here comes a revolutionary thought. Just go to bed earlier in the evening. In autumn and winter our body needs longer rest periods than in spring and summer. This is due to the melatonin. So if your body signals you: it's time for bed, then get the hint and cuddle up in bed.

3. The right nutrition is important

In addition to vitamin C, carbohydrates, protein and fat are now particularly important because they provide new energy at lightning speed. Valuable fibres make you feel saturated for a longer time and protect against autumn cravings. Whole grains, nuts, bananas, dairy and dried fruits help to create feel-good hormones, and for warming up inside, spicy and aromatic spices such as ginger, chili, cinnamon, allspice, cloves, nutmeg, pepper, cumin, turmeric or cardamom are great. Many of these spices are contained in curry and stimulate the blood circulation and thereby warm from within.

TIP: If possible, do not use ready-mixed curry spices, but buy the individual spices as a whole. So they can develop their full aroma.

Do you notice that everyone around you starts to sniff. Then drink ginger tea! Similar to chili and other spicy spices, ginger warms from inside and gets the circulation going. Ginger also contains vitamin C, magnesium, iron, calcium and potassium. Thus, important components to strengthen the immune system.

TIP: If the taste of ginger is too spicy, soften your tea with slices of orange, honey or a cinnamon stick. 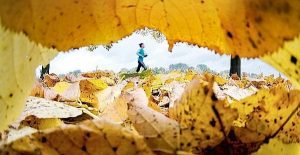 Overcome your inner temptation! Even if it's hard, go for a run after work, go to yoga, pilates, or any other favourite sport. It has been proven that sport in winter is a good antidepressant. Regular training not only gives you a great body, but also rewards you with a better mood!

Especially in autumn the neck area is often tensed up, because we pull up our shoulders against the cold. Sport is also great here, as the gentle movements of yoga or Pilates help to stimulate the blood circulation and relax the tense muscles.

How does autumn blues differ from seasonal depression?

But there are also people who fall into a real hole in autumn and winter. Experts speak of seasonal depression (SAD). However, SAD is only mentioned if the symptoms have always been present in certain seasons for more than two years. While autumn blues is often accompanied by cravings and weight gain, people with SAD suffer from loss of appetite.

Anyone who thinks that he/she regularly loses his/her zest for life in autumn should seek medical help.