Black noodles, or naked and fertile: It's Valentine's Day!

That it's almost Valentine's Day will have escaped few. A familiar complaint today is that the tradition lacks character for having become far too commercialized. Nevertheless, for many people it remains the perfect day to treat your loved one(s), including yourself, with something special.

Over the centuries, the festival has received many different faces and various myths have sprung up around this special 'Day of Love'. But what do black noodles have to do with Valentine's Day? 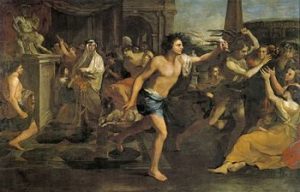 One of the explanations for the origins of Valentine's Day is the Roman tradition of Lupercalia. Lupercalia was an old cleansing ritual with a fertility component. In addition, it was a feast in honor of wolves, which in turn are a very important symbol for the origins of Rome (Remus, Romulus and the she-wolf). A goat sacrifice kicked things off. Some young, naked men rubbed themselves with the sacrificial blood, and cut strips from the goat's skin. In Adam’s costume they ran through the streets of Rome to 'flagellate' young women with the goat skin. A slap from these strips would ensure fertility, healthy pregnancy and easy childbirth. In later times, the festival became increasingly erotic and rules had to be tightened.

The pagan tradition remained so popular that Lupercalia was incorporated into Christian tradition. Saint Valentine became the happy one: his death date henceforward coincided with Lupercalia. Saint Valentine: the stubborn saint who according to rumors solemnized illicit marriages during the reign of Roman Emperor Claudius II. He was executed on February 14th and is still being commemorated by lovers worldwide.

Koreans have a totally different approach. In South Korea on February 14th, women offer their beloved chocolate. In return, men give women a nice treat on March 14th. Single Koreans who do not receive anything on Valentine's Day visit a restaurant on April 14 to eat black noodles ...as it is said to lament their loneliness.

Whether you receive something from someone is perhaps not that important. Taking a moment thinking of loved ones, their health and well-being and giving them some extra attention obviously can’t ever miss its target. Taking a somewhat commercialized day for this is of secondary importance. The intention as always occupies first place ...can’t hurt either to show it !!!