Gastric acid. Can you stomach it?

Gastric acid. It is indispensable for the digestion of our food, absorption of nutrients and the destruction of unwanted pathogens. But no matter how badly we need it, our stomach juices can also play tricks on us: from infants to the elderly, and everybody in between. How important exactly is the role of stomach acid in the digestive process?

Did you know the following facts about heartburn? 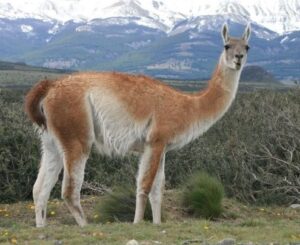 Too much or too little stomach acid?

With age and in stressful times, stomach acid production decreases. When the stomach wall secretes too little gastric acid, food remains too long in the stomach and the intestines. Food passes through the digestive tract only when the proper pH-value of the food slurry is reached. Normally, a meal stays put in the stomach for up to 3 hours before being passed through the pylorus to the duodenum. Delayed emptying, however, leads to gas formation, with resulting complaints such as burping, acid regurgitation and bloating. But more general discomforts such as stomach pain, bad breath and a burning sensation in the hypogastric (stomach and chest) area can also be part of this.

Confusingly, the discomforts of too little and of too much stomach acid are very similar. Belching, acid regurgitation, stomach pain, flatulence, bad breath and a burning sensation in the stomach and chest area: they belong to both syndromes. It is therefore good to be aware of actual causes before these inconveniences can be effectively addressed. 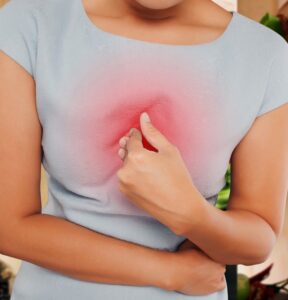 Fortunately, most stomach acid complaints can be tackled effectively and naturally through diet and lifestyle, whether you have a shortage or excess of stomach acid.

The following habits are known to induce stomach acid complaints:

Reflux and your esophagus

In addition to optimizing your stomach acid production as much as possible to support digestion, it is also good to look at the preceding station: the esophagus. The esophagus is often mistakenly thought of as nothing more than a tube that carries food from the mouth to the stomach. Yet there are aspects of the esophagus that are important in the overall digestive process:

With reflux, the lining of the esophagus becomes irritated, causing like a burning sensation in the abdominal area or behind the sternum (hence the term 'heartburn'). In addition to optimizing stomach acid, you also want to look at maintaining your mucous membranes. This, too, can be done in a natural way through nutrition. Vitamin B2 (riboflavin), for example, is known for its contribution to the maintenance of properly functioning mucous membranes. Riboflavin can be found in animal products such as meat (especially liver), fish, dairy and eggs, but also in flax seed, mushrooms and some nuts. Of course, specifically formulated dietary supplements, including B2, can also help in maintaining healthy mucus membranes.

benesco™ was developed by Epinutra. Bene means 'good' in Portuguese, and that's what the name of this nutraceutical is based on: it combines the good stuff of nature with science to maintain normal mucous membranes. After careful research into the most natural, safe and effective ingredients, benesco™ (yes, without a capital letter!) was established with the goal of supporting mucous membranes in general, and those of the esophagus in particular. Two of these ingredients are quercetin and riboflavin.

Unlike many other products which focus on the inconveniences of surplus stomach acid, benesco™ maintains the effectiveness of gastric acid. At the end of the day (meal), digestion and absorption of nutrients and the neutralization of pathogens should not be compromised. Benesco™ does not contain bicarbonates that change pH levels, nor substances which form a layer on top of the stomach acid. Benesco™ naturally tackles the problem at the source, in the esophagus. You do not have to fear any unpleasant side effects: there are no changes in the stomach or the stomach acid itself.

Benesco™ is a sugar-free lozenge with fresh mint taste that dissolves in the mouth and causes the active ingredient to be released over time wherever needed. The advantage of lozenges over capsules is that, by sucking, the effective ingredients mix with saliva. For example, the saliva now passes the esophagus mucous membranes with quercetin and riboflavin on the way to the stomach. BenescoTM was developed with pregnant women in mind; it is particularly suitable for the 80% of pregnant women who experience discomfort from reflux.

Last year, we conducted a satisfaction survey in collaboration with Epinutra into the effect of benescoTM among 100 pregnant women. The report showed that over 70% were satisfied with benesco™! Curious about what benesco™ can do for you? You can order this unique nutraceutical here - exclusively from Ergomax. 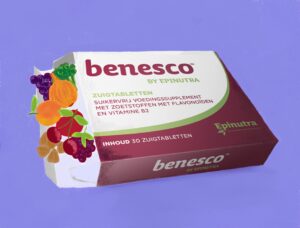