Halloween: Horror in your DNA

This weekend makes for an extra special Halloween: October 31 falls under a blue moon. Not a blue-colored moon like a blood moon is red, but the second full moon within a calendar month. The next time we celebrate Halloween under a blue moon won't be until 2039. Enough reason to think about Halloween this year! How did Halloween become what it is today, and can we only find ghost stories in fiction or does nature, too, have 'tricks' in addition to 'treats'?

Halloween is a celebration that originated from transformation. October and November are the months when the days get shorter, the temperature drops and the winds shift direction. The ancient Celts in Ireland had a name for it: Samhain, "End of Summer." Samhain is still the Irish Celtic word for the month of November. Life and death meet during Samhain. The nutritious crops were harvested and the cattle killed for meat so that the people could live on them to survive the cold months.

According to the Celtic calendar, the New Year also starts on November 1, which means that the year also ends on October 31, to be born again. This has strengthened the belief that on that day the veil between the world of the living and the dead is thinnest. That is why with Samhain/Halloween the dead loved ones, now that they are closest by, are honored and asked for protection. However, with the honored souls of the deceased, malicious souls also come along through the veil—that are to be deceived by unrecognizable disguise and make-up to leave the living alone. 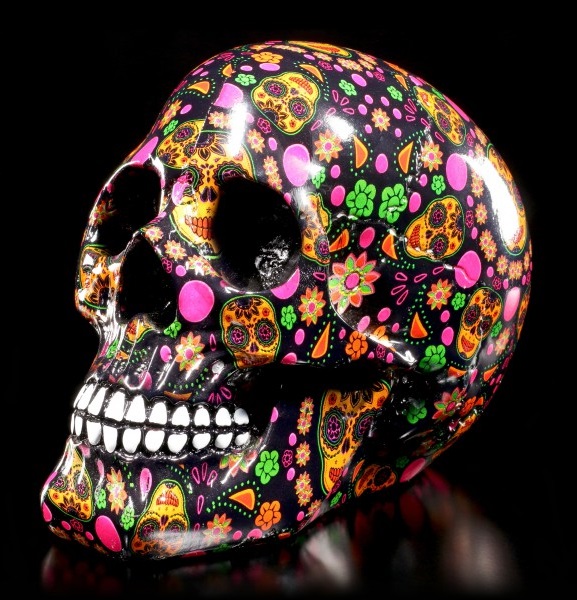 Another holiday concerning death is Día de Muertos. On November 1 and 2 (All Saints’ Day and All Souls’ Day) the dead are commemorated in Mexico. On the night of October 31 to November 1, the gates of the afterlife will open and the souls of dead children return to Earth. On November 2, the souls of adults follow. They are welcomed in a festive and colorful way with flowers, food and a decorated tomb or altar. Instead of something lugubrious, the skull is a cheerful symbol for this day: people are happy to be reunited with their deceased loved one.

Originally, Día de muertos is an old Central American festival, celebrated since the times of the Aztecs and Maya. This happened in the ninth month of the Aztec calendar, August. Together with the Spaniards, Christianity made its appearance, and it was moved to All Saints’ Day (the day that saints and martyrs are honored) and All Souls’ Day (commemoration of the dead).

Belief in ghosts is usually labeled as fantasy. But even the ultimate man of science, Albert Einstein, believed in ghosts! Well, in “spooky action at a distance”: that was his description of quantum mechanics, when knowledge about it was still in its infancy. Quantum mechanics is that branch of physics dealing with particles smaller than atoms. Different laws of nature apply regarding these small particles: a separate theory is needed to explain how everything is connected. With "spooky action at a distance," Einstein referred to quantum entanglement: the phenomenon whereby one particle can immediately "know" something about another particle, even if those two particles are separated by an enormous distance. It seems to violate the idea that nothing, not even information, can travel faster than the speed of light. Yet it is established as fact, which, unsurprisingly, Einstein thought was a ghostly affair.

Science has made huge strides forward in recent decades, but death remains mystifying. As soon as a living being has taken its last breath, decay begins. The process of autolysis (the irreversible death of cells) is initiated, which starts in the gastrointestinal tract under the influence of resident bacteria and quickly gains the upper hand in the microbiological balance. Apart from that, very little is known about how the process of returning to dust exactly works and what role the environment plays in it.

To this end, more and more so-called “body farms” (including forensic burial grounds) are being set up worldwide, in whom donated dead bodies are stored under various conditions and followed in their decomposition process. In this way more clarity is gained about the influence of external factors such as temperature, soil, water and insects, on bodily decay. This knowledge is very valuable in forensic and criminal investigations. Locations of body farms are, understandably, not widely publicized.

Sometimes life imitates art. The living dead, evil spirits and other entities that cannot bear daylight have featured in traditional folk tales around the world, and have been the subject of countless books, films, and other art forms. But where art draws its inspiration from life, sometimes the opposite is the case. There are studies where researchers could not help but think of supernatural beings, on seeing the results. The following genetic discoveries are stranger than fiction.

As mentioned, cells die along with the body, which also puts a brake on the duplication of genes, which ultimately break down. However, research has shown that, strangely enough, the opposite also happens. There are certain genes activated hours or days after death. Researchers encountered this strange gene activity in animals, as well as in bodies donated to science. More knowledge about this can be valuable in further research looking at organ transplant success rates as well as forensic research broadly speaking. The post mortem activity was seen in genes that direct cell growth but become inactive in a healthy body, such as genes that direct the growth of new vertebrae. But genes associated with the development of cancer also showed activity. This suggests that as soon as the genes that inhibit cancer cell proliferation inactivate, the genes associated with cancer will take their chance, even if it is at the last minute. When the cat’s away, the mice will play. All in all, these results shed new light on whether there is life after death, and where exactly the boundary lies between the two. ‘Zombie genes’ exist!

Dragons are another example of monsters that appear in legends encountered from China to Europe. These legends have inspired the name of existing animals such as the Komodo Dragon, the largest lizard in the world that, while not spitting fire, is almost as dangerous thanks to a number of special features that have been more accurately mapped out not long ago. When it bites, small channels between its teeth release poison that destroys platelets and lowers blood pressure, quickly sending prey into shock. What’s more, the Komodo dragon itself has gene mutations in its blood that all the more quickly activates platelets and fibrin-forming protein, staunching wounds faster and promoting blood clotting. 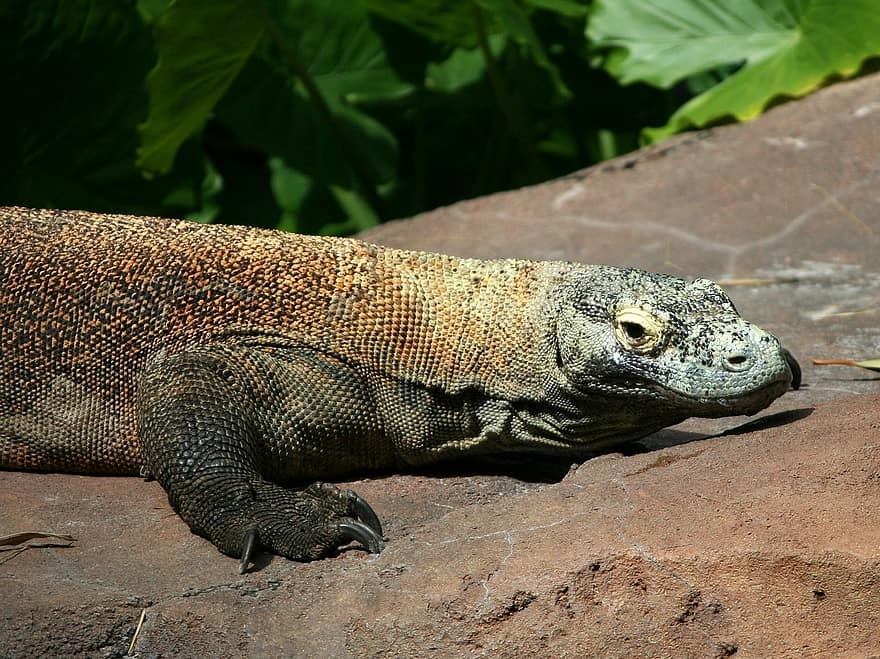 In addition, his metabolism is more similar to mammals than to cold-blooded creatures. Recent research showed that Komodo dragons show unique gene variations in their mitochondria as well, so they convert fatty acids into ATP more efficiently and more oxygen is available for energy production. They are also genetically capable of generating more new mitochondria than their fellow lizards. This ensures that this real-life dragon can sprint, jump and ambush its prey quickly kill it with his deadly bite.

Dragons provide inspiration on a tiny scale as well. The Hydra from Greek mythology has been the source of inspiration for a small invertebrate freshwater animal related to coral and jellyfish. Not so special at first glance, but don’t be deceived: this being is almost immortal.

The Hydra of Lerna was the many-headed water dragon for Hercules to kill as part of his Twelve Labors. That was not easy; as it turned out that every head that the Greek hero chopped off immediately grew back in duplicate. Burning up the stumps of necks left the last immortal head, which Hercules chopped off and buried under a heavy stone. 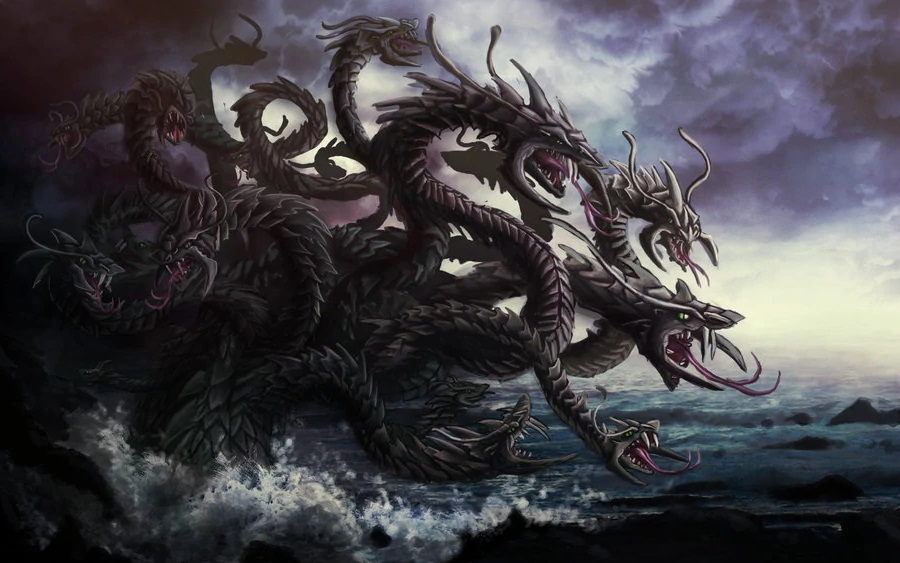 The innocent invertebrate of the same name owe that name to one and the same property: when any part of its body is removed, it grows back. But when the hydra is cut in half, each half grows separately into a full hydra and it has effectively duplicated itself. It has now become clear that it uses a special set of stem cells for this, and research is being done into how his special healing process works at the RNA level. That doesn't seem very interesting to translate to humans, but since the hydra was already alive before humanity came into existence, we do have a shared genetic background. As a result, insight into the regeneration properties of the hydra could open up new research directions for human medicine. 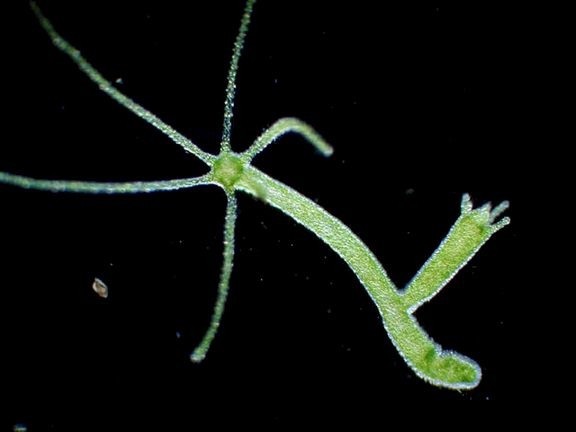 Who says Halloween, says "Trick or treat!" Although the 'trick' is never really an issue, tasty 'treat' options may be helpful in celebrating this blue-moon Halloween. What could be better than pairing the useful with the pleasant, and handing out vitamin gummies? You will find a wide range of such gummies, and other tasty supplements, in our range. Happy Halloween!