Halloween: not only trick or treat!

All Hallows Eve: Halloween. In modern, consumer culture, it is often portrayed as a horror party with an abundance of food and sweets: "Trick or treat." It is actually an old Celtic celebration from the time when people were self-sufficient, thanking their ancestors and the earth for the past year. And in the meantime?… .. Wicked spirits were deceived and kept at bay!

Halloween is a celebration that originates from transformation. October and November are the months when light changes, days get shorter, temperature drops and the wind takes a different course. The ancient Celts in Ireland had a name for it: Samhain, "End of summer". Samhain is still the Irish-Celtic word for November. According to the Celtic calendar, new year also starts on November 1st  and not January 1st.

It was the time of harvests, the cattle was slaughtered and preserved, and the annual balance sheet was made. There was plenty of abundance, but also uncertainty. Is the harvest enough to survive winter? Do we have enough herbs to heal the sick? What awaits us next year? In a nutshell; a time to pause and ask questions. 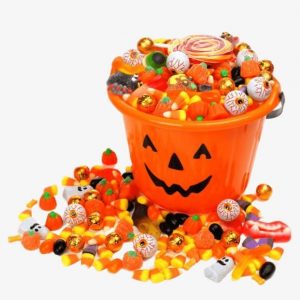 Due to the onset of darkness, the veil between the spirit and earthly world was thin on November 1st. A good day to honor ancestors. With ... .. "trick or treat" .... something tasty! To thank the deceased, ask for extra strength in difficult times, or perhaps to feel their company and presence again. Only one problem: evil spirits naturally also liked something tasty and were able to slip into the earthly realm. What is better than to disguise yourself so that you are not recognizable for 'evil' and to scare them off at the same time? So take out your masks, wigs, make-up and costumes!

Samhain joined Christian All Saints in the 9th century after the arrival of missionaries in Ireland and Britain. Pope Boniface IV introduced this day in 609 to honor all Christian saints. The ceremony was first celebrated on May 13th , but this date was changed to November 1st in 835 by Pope Gregory IV. All Saints' Day is followed on November 2nd by All Souls' Day, on which the deceased are remembered. This further contributed to the connection of Halloween with the realm of the dead and its spooky character. Many Irish and Scots immigrated to the United States in the nineteenth century. They took the enthusiasm for the party with them. And now Halloween is one of the most extensively celebrated holidays in the United States.

So traditionally Halloween comes down to a time of reflection, a time for new goals, a time of gratitude and respect for deceased loved ones. 'Trick or treat' goes a lot further than a mouth full of candy. It is actually a sacrifice; a ritual for showing gratitude and a request for prosperity and health.

The pumpkin as 'logo' 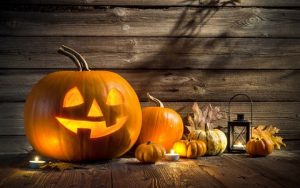 When you say Halloween, you also say pumpkin: the international 'logo' of Halloween. Where does that come from? The best known story about the pumpkin lamp is that of blacksmith Jack. This farrier led a pernicious life. The Devil came to visit Jack one day and wanted to take him to hell. Jack chased the devil into a tree with a trick and scratched a cross sign into it with a knife. The devil could no longer pass and begged, but Jack did not let him go. Provided .... The devil would promise that Jack would never be admitted to hell. When Jack died, he was not welcome in heaven because of his way of life ..... But the devil also did not allow him to enter hell anymore. The only thing that Jack still got from hell was a glowing coal that he put into a tuber to illuminate his eternal ghost walk between heaven and hell.

The pumpkin not only as 'logo' and lantern

Pumpkins are large vining plants that are often associated with autumn, Halloween and Thanksgiving and belong to the cucurbitaceae or gourd family.

The four main types are: 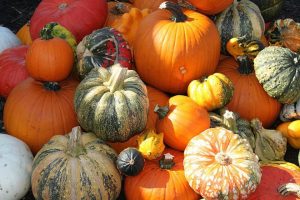 Pepo: a smaller pumpkin that is often used to carve Halloween pumpkin lanterns.

Maxima: the giant variety that is usually grown to participate in pumpkin contests at the fair

Mixta: are often used as decoration

Moschata: the variety from which pumpkin canned food is made

C. pepo is also called sugar squash and comes from North America. This pumpkin can weigh between 30 grams and 20 kilograms. Some varieties have smooth surfaces while others are ribbed or lobed. C. pepo is also available in different colors like yellow, orange and green.

C. maxima, also called mammoth, is drop-shaped or rounded, and the varieties are available in the colors pink, light blue and orange.

In the hollow center of a pumpkin are dozens of cream-colored seeds, up to 500 per fruit, which adhere to the pulp. After halving your pumpkin, you can discard the pulp after storing the seeds (if you so desire). Pumpkin seeds are an excellent source of calcium, protein and omega-3 fatty acids. They can be dried and salted to make a home-made snack, or to be planted in spring. Pumpkin seeds can also be used in the refinement of food or in the production of bread.

Pumpkin seeds are not only a tasty, easy to transport snack, but also a concentrated source of minerals and vitamins. Each 100gr. portion contains 23gr. protein, 15mg iron and 533 calories, but no cholesterol. The fibers provide regular waste disposal and protect the colon from diseases.

A special bonus in pumpkin seeds is the amino acid tryptophan, which is converted into serotonin in the brain - a nutrient that regulates brain function.

Apart from the pumpkin seeds, the pumpkin itself is healthy and an important source of vitamins, minerals and fibers. Pumpkins contain vitamin C, riboflavin, potassium, phosphorus and magnesium. Smaller but significant amounts of vitamin E (alpha-tocopherol), thiamine, niacin, vitamin B6, folic acid and iron are also present.

The bright orange color of the pumpkin indicates the useful secondary plant compound: carotene. It is converted to vitamin A in the body, providing a tremendous amount of antioxidants that can reduce the risk of heart disease that can contribute to normal cell division and support the immune system.

Vitamin A is also a must for good eyesight. Flavonoids such as cryptoxanthin, lutein and zeaxanthin destroy harmful free radicals. In particular, zeaxanthin and lutein protect the retina from macular degeneration.

Hard to believe but true! There are even Halloween genes. The scientists Christiane Nüsslein-Volhard and Eric Wieschaus have studied the genes for fruit fly development. During their research, they identified genes responsible for the transformation of the globular fly embryo into a recognizable, segmented body. The researchers called a gene cluster (group of genes belonging to the same gene family): Halloween genes. If changes (mutations) occur in this cluster then they lead to the death of the fruit fly. Under the microscope, the deformed fly bodies looked like as if they were haunted or like a mummy. The gene family also includes the genes that are called Shadow, Spook and Shade. These genes encode enzymes called cytochrome P450. These are involved in the control of steroid hormones. Humans have these enzymes too.

New in our assortment: Natural products from Dr. Mercola! Dr. Mercola is a passionate advocate of naturopathy, an advocate for the overall well-being of humans and animals. He is a household name in the United States and a progressive thinker committed to changing the mechanisms of today's healthcare system.

Dr. Mercola has been providing education and transparent information for a healthier and fairer life for humans and animals for more than two decades! We are very satisfied with the products of Dr. Mercola and have therefore included them in our range. Learn more about and get to know Dr. Mercola’s natural and often traditional supplements.