The soap opera, or melodrama, around glyphosate continues. The Guardian recently published an article based on a large scientific study showing that people exposed to substantive amounts of glyphosate are 41 percent more likely to develop non-Hodgkin's lymphoma. A Dutch investigate collective, Follow The Money, took things a step further and revealed that Monsanto abandoned Dutch research into glyphosate when it produced 'unacceptable' results. As (organic) icing on the cake, it appears from a publication by Bloomberg that a lawsuit has been filed because the pesticide would kill the human healthy gut microbiome—something Monsanto has always denied.

Glyphosate was first introduced in 1974. Its use since has increased enormously beyond its original use as a herbicide. Glyphosate is now sprayed directly on crops as a 'desiccant' or as a means to faster harvesting.

As a marketing ploy, genetically manipulated 'glyphosate-tolerant crops' were introduced at the same time. These crops had to be genetically modified specifically to be resistant to the herbicide. Unlimited glyphosate could now be sprayed killing all plants, except said genetically engineered ones. So much for biodiversity.

Meanwhile it appears that glyphosate is abundantly sprayed on conventionally grown crops. From amateur horticulturist to public space landscaper: everyone grabbed the easily available glyphosate. 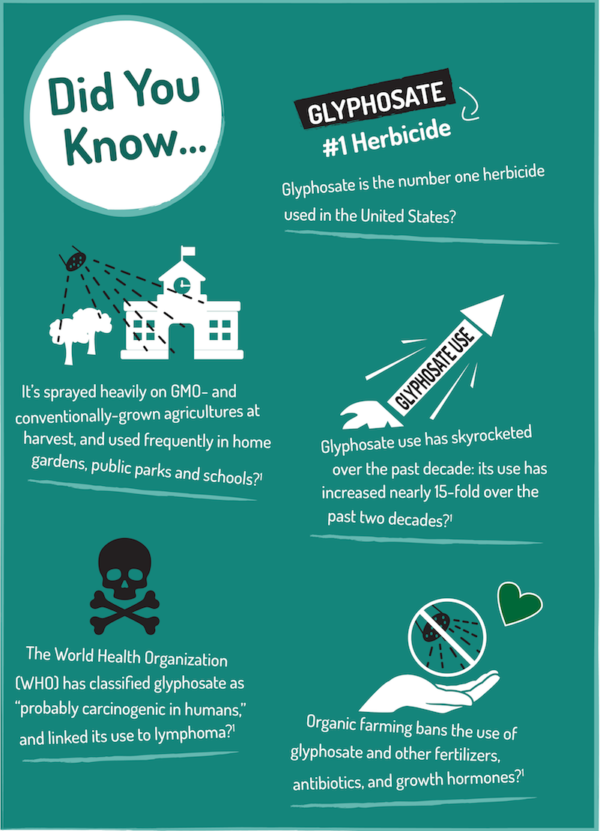 Glyphosate is a broad-spectrum herbicide. This means that it kills a wide range of vegetation. It works generically on plants, except on the previously mentioned glyphosate-resistant genetically modified crops. But as it turns out, glyphosate also kills microbial life in the soil. This is problematic because micro-organisms are needed for a healthy soil. Precisely as in the human gut microbiome, microbes in the soil generate favourable conditions necessary for optimal crop growth. Another disruptive factor is glyphosate’s 'binding' of minerals. The latter thus become less available for absorption by the plant whether partially or entirely. This of course does not contribute to the nutritional value of cultivated vegetables.

An important ingredient for overall health is an adequate balance in the intestines. Balance is where healthy and useful intestinal bacteria out-populate bad ones. Useful bacteria in our intestines help to achieve optimal digestion and to support immune functions. The gut microbiome is involved in the production, regulation and production of many hormones, neurotransmitters, enzymes and vitamins. Perhaps most important, useful bacteria prevent "bad" or "unfavourable" variants from being able to grow and cause disease.

When people ingest glyphosate, it can act as a broad-spectrum antibiotic in the gastrointestinal tract. In animals, it has been shown that glyphosate disrupts the gut microbiome. In general it may be assumed that healthy bacterial growth in particular is increasingly under pressure from environmental factors such as these. Ominously, studies have shown that exposure to glyphosate influences the effect of antibiotics.

A lawsuit was filed with the federal court in Kansas City, Missouri, in early February this year. According to the plaintiffs, Monsanto has systematically misled users by assuring them that glyphosate has no impact on the gut microbiome. On labels, consumers were wrongly assured that the active substances target an enzyme not found 'in humans or pets'. This is unsubstantiated, according to the prosecutors.

Monsanto is now involved in more than 9,000 lawsuits.