Our metabolism as the running motor behind our energy: a familiar concept. Just as an engine requiring fuel and maintenance to keep running, we use fuel for all physiological processes in our body and proper maintenance ensures a longer life. Naturally it is important to look at the quality of the fuel, including its individual components, your body requires to optimize your metabolism. Deploying an isolated part of your metabolism can act as a powerful catalyst for your energy resources and support various bodily functions, especially as you get older. Nicotinamide riboside is one such catalyst. How exactly does it work?

Fuel for the mitochondria

Nicotinamide adenine dinucleotide (NAD) is a coenzyme that acts as an electron carrier at the cellular level. The form of NAD carrying electrons is called NAD+. It plays a crucial metabolic role: this coenzyme takes electrons from the diet and after absorption routes them to the motors in the cell’s nucleus, the mitochondria. Mitochondria can be found in almost every cell of the body, especially in tissues that use a lot of energy including the muscles, the heart and the brain. The interplay of cellular components within the mitochondria creates a conduit for energy from the fuel in our food and oxygen that we breathe; it is called adenosine triphosphate, ATP for short. When ATP is hydrolyzed in the body, it releases the energy that our cells use for virtually all bodily processes. For the cell to function properly, it is therefore important that the mitochondria receive sufficient fuel.

After NAD absorbs electrons from the food, it becomes NADH. Think of NAD as a truck that has to take supplies. Without the empty NAD+ truck, there is no NADH to deliver power to the cells.

Beyond nourishing the mitochondria, NAD still has many features in the body. For example, NAD is involved in DNA repair and gene expression, factors that are important and indeed become increasingly important as we age, as these processes lose strength due to aging. NAD balance in our cells brings about balance in the functioning and health of our body. An imbalance is associated with many physical disorders and with progression of the aging process.

NAD can be synthesized by a number of bodily cells from tryptophan (from animals and bacteria) and aspartic acid (plants and micro-organisms). Some cells cannot do this, thus requiring the nucleotides of NAD in some other way. These cells use precursors of this coenzyme to build NAD via a process that achieves optimum use of NAD: nothing is lost! These precursors are forms of vitamin B3, also known as niacin.

Vitamin B3 forms part of the vitamin B complex and for a long period of time was subdivided in two forms: nicotinic acid and niacinamide. This vitamin is the determining factor in the synthesis of NAD and thus involved in the proper functioning of many physiological processes. For example, niacin is important for keeping the skin and mucous membranes healthy, but is also indispensable for a properly functioning nervous system, for metabolism and energy levels. Our mind benefits as well: vitamin B3 contributes to mental resilience, concentration and memory.

As mentioned, vitamin B3 has long been divided into two types. More recently, nicotinamide riboside (NR) was added: a vitamin B3 analogue described when it was first discovered in 1944 as a growth factor for a bacterium that lives in blood. Only in later studies, using a synthesized form of NR, its special properties came to the fore. In fact, of all vitamin B3 forms, NR is the most efficient form.

You may wonder why you would use a precursor to NAD, if you can also supplement NAD+ itself. There are several reasons for this:

Since even orally taken NAD+ is decomposed to B3 vitamers before the cell absorbs it, it is more advantageous to take the latter. However, it is known that certain forms of B3 in high doses can lead to flushing: the skin turning red, which can also cause skin irritation. Another detrimental side effect can be the suppression of sirtuin within the body. This covers proteins that play an important role in gene expression.

Nicotinamide riboside, however, is a new generation of niacin that is flush-free and does not suppress sirtuin. It is a natural substance present in milk and yeast products albeit in the small quantities. As we age, the amount of NAD in our body decreases to such an extent that maintaining an ideal balance through natural nutrition becomes increasingly difficult. Given the important role of nicotinamide-adenine-dinucleotide within cells, nourishment with its most effective precursors is meaningful.

Often associated with nicotinamide riboside (NR) is Nicotinamide Mononucleotide (NMN). That ha a reason: both are known forerunners of NAD+. However, NMN is not a precursor to NAD+ like NR is: it is not a form of vitamin B3. In addition, NR has already seen several clinical studies in both humans and animals, the results of which have been published. This is not yet the case with NMN at the time of writing. As a consequence, to date there is no European approval for use of NMN as a dietary supplement. 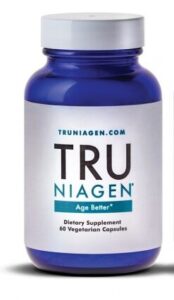 The possibilities of nicotinamide riboside for our body were discovered in 2004 by the American doctor Charles Brenner. His research and patented NR formula, together with sophisticated ChromaDex production techniques, led toTRU Niagen®:, a dietary supplement manufactured with exclusively patented nicotinamide riboside. TRU Niagen® is produced observing the high GMP (good manufacturing practice) standards and is recognized as a safe product by various world-leading agencies including the FDA in the United States and the EFSA in Europe. TRU Niagen®  by ChromaDex and its potential application to human health are the subject of ongoing (pre)clinical studies.

Clinically tested and proven, certified safe for human use and patented: that is what Niagen TRU® is about. This makes it our choice in supporting an energetic lifestyle.