Why you should be eating oysters! 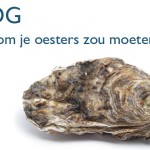 Oysters look like very simple things: two shells with gray meat in-between. But do not be fooled: oysters have extraordinary nutritional value and characteristics. Oysters are among the most nutritious foods in the world. Including 59 trace elements, 12 vitamins, 19 amino acids and omega-3 fatty acids, each oyster offers an incredible range of nutrients. Oysters contain zinc in especially large quantities. Oysters are a real brain food; they have, according to some experts, played a leading role in the evolution of our brains. Everyone should be eating oysters on a daily basis-- or taught to eat them.

Any health-conscious person will be interested to know that eating oysters has the following advantages:

The extraordinary ecosystemic properties of oysters range from filtering water to restoring coastlines and marine life after devastation. Oysters were even responsible for the formation of the planet as we know it today. Oysters make stones; shells are in fact the basis for limestone. This in turn sustains ecosystems and creates shelter niches for small animals and young fish.

In the past there were many more oysters present in the seas. Recently oysters have suffered from overfishing, pollution and disease. The good news is that many projects are started with oyster populations being restored and ecologically sound farming and sustainable fishing being promoted. For example, in 2014, the Dutch Wageningen University started with a project to return the flat oyster (Ostrea edulis) to the North Sea.

1. All oysters settle down—eventually
If you think about oysters you are likely to imagine unmovable stones, yet oysters start off as swimming creatures. Twelve hours after their birth, their shells are formed by extracting calcium from the water. After 3 weeks, the shells are so heavy that they sink to the bottom and begin to settle down.

2. Oysters love to procreate
Little baby oysters cannot defend themselves and are an easy meal for marine life. To ensure their survival enormous amounts of sperm and eggs are discharged into the water. Females produce 50-100 million egg cells every season; seasonal counts of sperm cells range in the tens of billions.

3. Oysters switch sex several times during one life cycle
Almost all oysters begin their life as a male. As they grow, they often turn female. Sometimes they are simultaneously male and female.

4. Oysters create their own ecosystem
Oysters love to connect to other oysters and form reefs attracting other animals. Thousands of species of fish and invertebrates depend on it. Biodiversity explodes within a few weeks of the formation of an oyster bank.

5. Oysters filter water
A major biological feature of an oyster bank is that the water quality improves immensely. Because oysters cannot move, they eat whatever comes floating by. Good nutrients feed the oyster, while bad substances are emitted into a slime layer. This mucus layer is called pseudo-feces and it plays an important role in removing dirt and plankton from the water.

6. Oyster nurseries are sustainable
Oysters filter the water as a means of feeding themselves; they do not need anything else. This contrasts with salmon farms. Just place a structure where the oysters can attach to and wait. The environmental impact of growing oysters is largely positive for other marine life.