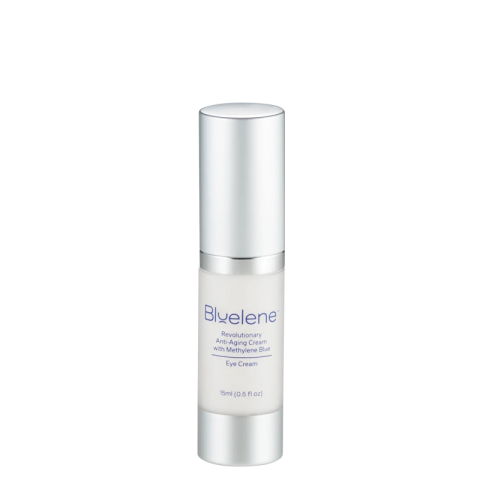 Bluelene® Eye Cream is a moisturizing cream specifically developed for the delicate area around the eyes. This eye lotion with anti-aging formula aims to soften and reduce the first signs of aging, such as the appearance of crow's feet, wrinkles, bags and dark circles. The product contains the compound methylene blue, a special and effective ingredient central to Mblue Labs™ patented formulations. Methylene blue is a coloring agent with various uses. Recent research indicates that methylene blue visibly counteracts skin aging. Let methylene blue transform the skin around your eyes! Bluelene® Eye Cream is free from perfume and parabens, and is suitable for all skin types.

Science is a challenging and often long process that aims to unravel and understand the mysteries of Mother Nature. Dr. Kan Cao, founder of Mblue Labs™ and professor at the University of Maryland, has been studying aging since she received her PhD from Johns Hopkins in 2005. She is one of the world's leading scientists in the field of aging research, and her recent publication on methylene blue is one of the greatest discoveries her field has ever seen. Her team discovered that this substance has special anti-aging properties for the human skin. Pertinent scientific findings are applied in the products of Bluelene®, the world's first skin creams with methylene blue as main ingredient. In this formula Methylene Blue is combined with other powerful ingredients, including Albizia Julibrissin bark extract (Persian Sleeping Tree extract).

For years, Mblue Labs™ researched the common dye methylene blue, which led to the finding that the substance had special anti-aging properties benefitting the human skin. The substance not only helps extend the life of individual skin cells, but also counteracts the visible signs of aging and ensures natural skin rejuvenation. Since the discovery was published in Nature Scientific Reports, scientists all over the world have been excited about Dr. Kao Cao's findings. After her discovery, Dr. Kan Cao launched Bluelene® creams, the first skin creams in the world based on methylene blue.

Methylene blue is a powerful antioxidant in nanomolar concentrations that fights the skin aging process in various ways. Today it is widely accepted that oxidative stress is one of the leading causes of skin aging and the use of antioxidants in skin care is considered an effective approach to slowing down the skin’s aging process.

The importance of skin care

The skin is the largest and most visible organ of the human body and psychologically vital for both men’s and women’s body image. We often try to beautify the skin with make-up or care products. Aged skin has well-known, visible biological characteristics caused by external influences as well as physiological factors. We can divide skin aging into intrinsic and extrinsic aging. Intrinsic skin aging reflects the naturally occurring changes in the skin as we age. Extrinsic skin aging occurs as a result of exposure of the skin to environmental factors such as smoke, sunlight or air pollution. Although they are essentially different, both types of skin aging are in part due to the oxidative load from free radicals. A good skin cream protects your skin against various external influences and also preserves the intrinsic health of your skin.

Methylene blue is an age-old substance first synthesized in 1876 by the German chemist Heinrich Caro. The substance has been used over the years as a surgical dye, as a redox indicator in analytical chemistry and as a means to kill fungi and parasitic protozoa. Methylene blue is a diamino phenothiazine that affects, among other processes, the electron transport within the body. Methylene blue is highly permeable to biological membranes, allowing it to enter intracellular compartments such as mitochondria, lysosomes and cell nuclei.

Bluelene is a new, patented line of skin creams that – as the only one in the world – contains the special and patented substance methylene blue as the main active ingredient. The line was developed by Mblue LabsTM based in Bethesda, Maryland, in the United States. The lab has spent years researching how methylene blue supports skin health and can keep the skin’s appearance radiant. Mblue Labs™ is led by Dr. Kan Cao, a worldwide authority in aging research.

Gently apply to clean skin below, around and above the eye once or twice a day.