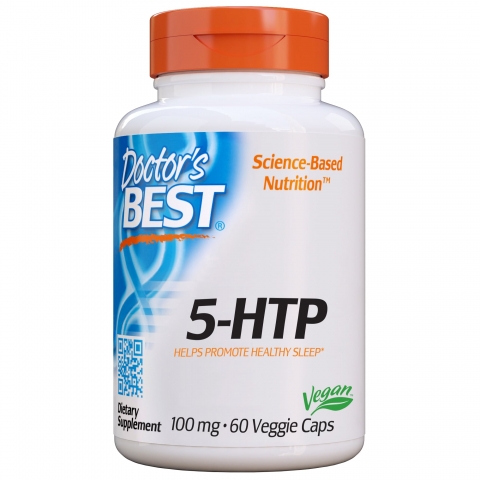 5-hydroxy l-tryptophan (5-HTP) is a natural metabolite, or intermediate compound. It derives from L-tryptophan and is the precursor to the neurotransmitter serotonin. Serotonin is subsequently converted into the hormone melatonin. 5-HTP can thus be used directly for this purpose, in contrast to L-tryptophan, which has to be converted first. 5-HTP is well absorbed. After ingestion, 70% directly enters the bloodstream.

Doctor's Best 5-HTP is extracted from the African herb Griffonia simplicifolia, also called Bandeiraea simplicifolia. It is one of the traditional herbs that we Europeans have imported from Africa. The plant is used in various African areas, indeed for a range of indications. Before supplements with Griffonia simplicifolia extract became available, the pulp from the bark was used. The trunk and leaves also contain active ingredients. Often the bark is chewed.

In 1960, chemical analyses revealed that Griffonia simplicifolia seeds contain several 'indole' derivatives including 5-hydroxy L-tryptophan, also known as Oxitriptan and L-5-HTP. The most familiar name is 5-HTP. After the isolation and identification of the 5-HTP molecule, interest in Griffonia simplicifolia seeds quickly broadened due to the high concentrations it contains. In 1989, the United States instituted a ban on products containing L-tryptophan because of health risks from contaminated supplements. This ban increased the popularity of 5-HTP because it is a suitable, direct alternative.

It is important not to confuse 5-HTP with L-tryptophan. Although L-tryptophan is the direct precursor to 5-HTP, L-tryptophan is also converted within the body into a range of other substances. 5-HTP, on the other hand, is utilized only for serotonin production.

In addition to its role as a traditional herb, the Griffonia simplicifolia plant is also used in daily life by, among others, the inhabitants of Ghana. For example, the wood is used as a walking stick because of its strong structure, women make facial powder from the roots, and the leaves are used in the production of black dye.

The seeds of this plant are mainly used in supplements. Ripened seeds contain about 6-14% of 5-HTP and are harvested annually. Processing of the seeds is similar to the processing of cocoa (often the same production facilities are used). The semi-finished product from this process forms the basis for the purer extracts that end up in the capsules.

Doctor's Best was founded in 1990 by a physician because of his interest in the scientific basis of wholesome nutrition. The company produces over 200 high-quality nutritional supplements. All products are made from branded raw materials and are carefully tested during every step of the production process, from raw material to finished product. Production takes place on the strict basis of Current Good Manufacturing Practice Guidelines (cGMP). Doctor's Best works with nutrition scientists worldwide to find new, tested ingredients. This results in high-quality end products, developed according to the latest scientific insights.

Take 1 capsule daily, with or without food, or as recommended by a healthcare practitioner.