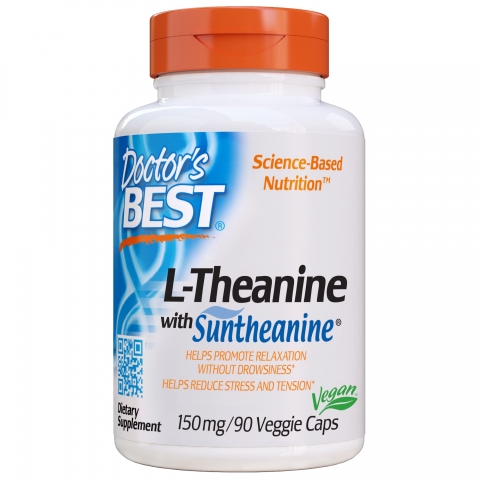 L-Theanine featuring Suntheanine® contains 100% pure patented L-theanine from Japan. L-theanine (L-glutamic acid-gamma-monoethylamide) is a glutamine-like amino acid that gives tea its characteristic taste. It is a non-protein amino acid as it is not built into bodily proteins.

This product contains only L-Theanine from the patented Suntheanine ® brand. Suntheanine® is produced by a natural enzymatic process resulting in 100% pure L-isomer theanine. Theanine products can also contain the D-form (D-theanine), but this form is inactive. The makers of L-theanine Suntheanine ® have won an award for this product. In the United States, it enjoys GRAS (Generally Recognized As Safe) status, meaning it has been found safe by the Food and Drugs Administration (FDA).

The history of tea

Tea most likely originated in Yunnan, China, during the Shang Dynasty (1500 - 1046 BCE). The medicinal drink tea was, unsurprisingly, first described in a Chinese text. Chinese tea was introduced in the 16th century to Portuguese priests who took small quantities back to Portugal. However, it was the Dutch who first imported tea on a large scale. Tea then became a popular drink among the Dutch. From there it found its way all over Europe, Britain in particular, where it was initially drunk mainly by the affluent.

After water, tea has become the most consumed drink in the world. Consumption has traditionally been associated with vitality and relaxation. Tea comes in many different types and flavors, but the traditional tea plant is the Camellia sinensis. The leafs of this plant are used in black tea as well as green tea. Camellia sinensis grows in tropical and subtropical countries and contains a host of bioactive substances, such as flavonoids and L-theanine. In 1949, Japanese researchers discovered L-theanine as being a key tea compound. Since then this substance has been widely researched and utilized.

Doctor's Best produces high-quality food supplements based on scientific research into good nutrition. The raw materials for the products are grown, developed and researched worldwide. Doctor's Best works together with nutrition scientists to produce strictly high-quality, highly effective supplements. Only branded raw materials are used and supplements have been thoroughly tested during every step of the production process, from raw material to end product. The manufacturing process is integrally based on the Guidelines for Current Good Manufacturing Practice (cGMP). Doctor's Best was founded in 1990 by a physician with an interest in wholesome nutrition. The company’s product range now includes more than 200 items.

Take 1 capsule daily without food or as recommended by a healthcare practitioner. Warning: Not recommended for pregnant and breastfeeding women.