By: Epinutra
Be the first to review this product
Skip to the end of the images gallery 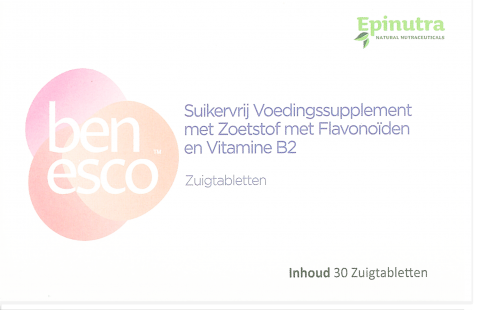 Benesco™ - Lozenges
Skip to the beginning of the images gallery

Benesco ™ is the first product that Epinutra has developed after long research. The product is based on an interesting discovery: a new mode of action for quercetin, a natural ingredient found in foods such as onions, apples, berries, tea and red wine. The main ingredients of Benesco ™ are aimed at the maintenance of normal mucous membranes, especially those of the esophagus. The development of the product has literally taken ten years. During the study, more than 2,000 molecules were tested to ensure that the product would be safe, healthy and effective. Because the natural ingredients in Benesco ™ are taken as a lozenge, the active ingredients come into direct contact with the mucous membranes of the esophagus for much longer than if you were to eat the ingredients in the form of food. The result of years of research by Epinutra is a sugar-free lozenge with fresh mint flavor and natural active ingredients.

About the active ingredients in Benesco ™

Benesco ™ is a compact lozenge that brings together the five well-documented ingredients quercetin, riboflavin, isomalt, magnesium sterarate and mint. All these ingredients have different roles in the product. For example, each tablet contains 38 mg of quercetin. Quercetin belongs to the flavonoids, a group of active substances that occur naturally in plants and which, among other things, have an antioxidant effect * 3. The active ingredient riboflavin, also known as vitamin B2, is good for the mucous membranes including those of the esophagus and isomalt is added as a natural sweetener extracted from sugar beet Finally, 30 mg of mint is added per tablet for a fresh taste to support healthy digestion * 3. Magnesium sterate in an excipient that is needed to make the tablets.

Quercetin is a vegetable coloring or pigment that gives various types of flowers, fruits and vegetables their specific color and which falls under the flavonols within the flavonoids group. The substance is also called "quercitin" or "quertine" and plays an important role in our diet. Many medicinal plants such as ginkgo biloba, elderberry and deer hay owe their positive properties to the high quercetin content. This is because it is a substance that has an antioxidant effect and that promotes the effect of vitamin C * 3. Quercetin also helps reduce histamine release and may be beneficial for cardiovascular health * 3. Many more beneficial properties are attributed to this special substance, which is currently being further studied in numerous studies worldwide.

The term "nutraceutical" was first used by Dr. Stephen DeFelice and it is a combination of nutrient ("nutra" or "nutricion") and drug ("ceutical" is the last part of "pharmaceutical"). Since the beginning of this millennium, there has been a growing focus on this overlapping field of medicine and nutrition, two disciplines that until then have been mainly approached as separate disciplines. The medicinal use of food, however, is as old as Methuselah. Hippocrates, the founder of the modern drug industry, said: "Let food be your medicine." Nutraceuticals are made from foods or parts of foods, such as fruits, vegetables, nuts, seeds, and herbs.

Epinutra develops nutraceuticals based on solid scientific research. The company was founded in 2019 in Wageningen, Netherlands, after more than ten years of laboratory research, and draws on the exciting discoveries of safe, well-characterized natural nutrients known to support esophageal health. Epinutra has a unique approach to supporting epithelial cell barrier function. Its mission is to further specialize in this and to make this approach accessible to a wider audience through its first product Benesco ™.

* 1 Riboflavin (vitamin B2) is good for the mucous membranes

Use 1 lozenge per day after a meal. It is advised not to consume other foods for up to 30 minutes after using a lozenge.