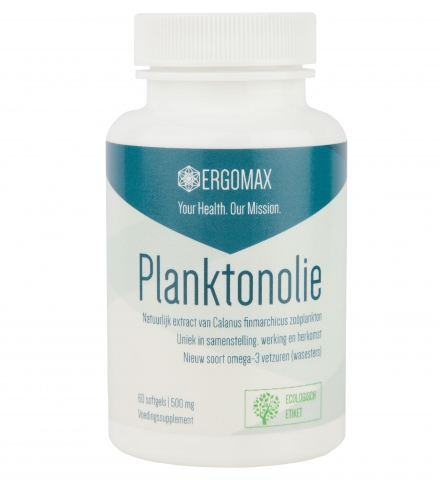 Ergomax Plankton Oil consists of a natural extract of the Calanus finmarchicus. Calanus finmarchicus belongs to the Arctic Ocean zooplankton and contains unique omega-3 fatty acids and antioxidants. Calanus oil has a special composition of omega-3 fatty acids, namely docosahexaenoic acid (DHA), eicosapentaenoic acid (EPA) and stearidonic acid (SDA). The uniqueness of Calanus oil is that the fatty acids predominantly occur in the form of wax esters, which makes that this product has additional health benefits.

Thanks to their wax ester form, the omega-3 fatty acids in Calanus oil are digested more slowly than the ethyl esters and triglycerides from fish oil, so that the free fatty acids are released further down in the intestines. This so-called distal part of the small and large intestine contains many GPR120/FFA4 fatty acid receptors, or G protein-coupled receptors. EPA and DHA include activators of GPR120/FFA4. In this way, the omega-3 fatty acids stimulate the release of various signal substances endogenous to the human body. The high content of stearidonic acid (SDA) in planktonic oil is an efficient precursor to EPA.

The origin and evolution of the nervous system is one of the most intriguing and enigmatic events in evolutionary biology. G protein-coupled receptors are membrane-bound proteins that control crucial processes throughout the body. These receptors evolved over 800 million years ago and are therefore deeply intertwined with physical functioning in many different ways. Consider the homeostatic regulation of systemic metabolic processes.

Wax ester omega-3s are not new but were already known from various food groups associated with Arctic Region peoples. These include the Inuit from Greenland and Canada and early inhabitants of the northernmost parts of Europe. Among other foods, they ate whale, penguin and seal: diets rich in this type of fatty acids. For solid environmental reasons, these animals are today rarely caught for human consumption.

Sustainable catch in the Arctic Ocean

The Calanus Finmarchicus used in Ergomax plankton oil are 3-5 mm small lobster species from the Calanidae family. These animals are part of the zooplankton, sitting at the beginning of the food chain, and are caught in the Arctic Ocean. The total world biomass is about 300 million tons: a much larger biomass than the total biomass of fish in the same waters. This makes plankton use very sustainable. The catch is made observing an energy-efficient 'slow process'.

Every production batch of Calanus oil is tested for impurities, among other substances heavy metals and microbiological contaminants such as bacteria, yeasts and fungi. The oil used complies with strict European regulations. Calanus finmarchicus sitting at the beginning of the food chain (the lowest trophic level) means that accumulation of toxins hardly plays a role.

An important factor in omega-3 products is the antioxidant content. Spoilage (oxidation) of fish oil, due to the low content of natural antioxidants, is a valid concern. The advantage of plankton oil from Calanus finmarchicus is the high content of the antioxidant astaxanthin. In addition, the wax ester structure contributes to the stability of the oil, ensuring that the omega-3 fatty acids in the capsule do not spoil. This guarantees quality, for longer shelf periods. Plankton oil can be kept at room temperature for over two years.

Meeting our customers’ high expectations is what Ergomax is all about. Our product range consists of natural nutraceuticals with proven effects, accompanied with professional advice. Considerable time goes into research into new and unique compounds. We offer many special niche products as well. Quality is paramount, always. All of our products have been carefully assessed and tested. This equally applies to our very own product line. Fabrics are as natural as possible and products processed as little as possible. Everyone should be able to strive for optimal vitality.

Take 2 to 4 capsules per day, with a meal or as directed by a healthcare professional.

Allergens
Fish, Crustaceans or Molluscs
Instructions
Storage: see label. Keep out of the reach of children. Consult an expert before use in case of pregnancy, breastfeeding, illness or medication.
Write Your Own Review