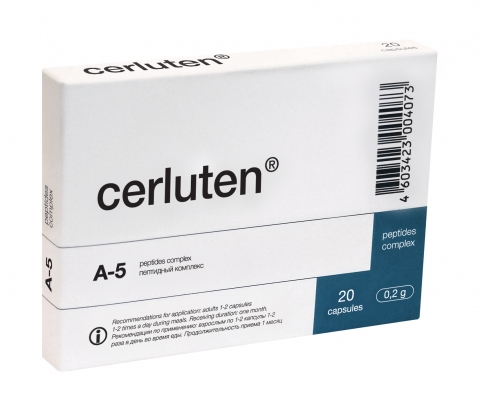 Cerluten - Brain Extract
Skip to the beginning of the images gallery

Garmonia's Cerluten® Brain Extract contains a peptide complex specific to the brain and nervous system. Peptides are molecules consisting of two or more amino acid compounds. They occur naturally in every cell of our body. Cerluten® contains glandular extracts. Like the other products from the advanced peptide bioregulator line, Cerluten® is physiologically active and very potent.

Peptides are known as 'messenger molecules' and are responsible for communication in the body. They attach to specific sites on cell walls to transmit biological information. These messages take place at the gene level and are organ- or gland-specific. The natural amino acid compounds occur naturally in our food.

Cerluten® is very safe to use. There are no known side effects or contraindications. The product has been extensively tested for microbiology, heavy metals and other toxic elements. Cerluten® is suitable for adults 18 years and over. Several products from the peptide bioregulator line can be used simultaneously. All over the world, over 15 million people have already found their way to Garmonia’s powerful products.

You can take Cerluten® in several ways. For general use, we recommend taking one pack of the product every 6 months. This equates to 2 capsules per day, for 10 consecutive days. For specific indications, we recommend using three packs of the product in a row. Because the product affects individual users differently, it is possible to shorten or extend the use at your own discretion.

The precise effect of peptides was unraveled in the 1980s by Russian professor Vladimir Khavinson during a study for the Soviet Union. The results of his research were kept secret for over twenty years. Khavinson discovered, among other things, that an interaction takes place between peptides and our DNA. Khavinson is president of the European Academy of Gerontology and Geriatrics (IAGG) and advisor to several Ministries of Health and honorary member of several universities. Khavinson is also a frequent speaker at anti-aging conventions, where he talks about his discoveries.

Garmonia is the number one peptide bioregulator company. With top doctors, specialists and professors and no fewer than 15 modern laboratories in its management portfolio, Garmonia prides itself on a very progressive and innovative vision on health and vitality. The company's mission is to optimally support bioregulatory processes within the body, through clinical research and the production of new para-pharmaceutical supplements, specifically peptide bioregulators. Garmonia is responsible from A to Z for these new resources: from research and development to products’ introduction to medical practice and marketing support. The supplements have a high pharmacological activity and are unmatched in terms of formula and efficacy.

More Information
Product Name
Cerluten - Brain Extract
SKU
GR-226-config
Brand
Garmonia
Content
20 or 60 capsules
User Instructions
For general use, in the absence of specific indications, take 2 capsules per day for 10 days (one package). Repeat once every 6 months. Where demand exists or in case of specific indications, use may be intensified. The same protocol may be repeated once a month or once every 2 or 3 months. Several products from the Peptide Bioregulator product may be used simultaneously. Caution: Do not use during pregnancy or breastfeeding. Always consult your doctor in case of a medical indication.
Ingredients per Serving
20 mg peptide-rich brain extract of calves †. † Recommended Daily Amount not established.
EU Norm
*RDA = Recommended Daily Allowance
Other Ingredients
Microcrystalline cellulose (E460), beet sugar, lactose, starch, twin 80.
Allergens
Lactose
Instructions
Storage: see label. Keep out of the reach of children. Consult an expert before use in case of pregnancy, breastfeeding, illness or medication.
Write Your Own Review