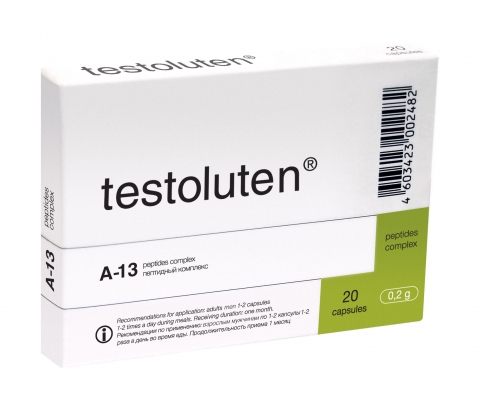 Testoluten - Testicle Extract
Skip to the beginning of the images gallery

Garmonia’s Testoluten ® Testicle extract contains a peptide complex specific to the male reproductive system and testicles. Testoluten® contains gland extracts extracted from testicular glands of Danish pigs and cattle raised in an environmentally friendly manner. Testoluten® is a product from the advanced peptide bioregulator line. It is very active and very potent in the body. Peptides occur naturally in every cell of our body. These are molecules composed of two or more amino acid compounds.

Peptides are also known as 'messenger molecules' because of their messenger function. They attach to specific places on cell walls to relay biological messages and signals. These messages take place at the gene level and are organ- or gland-specific. The natural amino acid compounds occur naturally in our food.

Testoluten® is very safe to use. There are no known side effects or contraindications. The product has been extensively tested for microbiology, heavy metals and other toxic elements. For general use, you can take a course of 1 pack once every 3 months or six months. If you need a higher dose due to a specific indication, it is best to take three packs consecutively. Because the product has a different effect on each individual, it is possible to shorten or extend the period of use at your own discretion. Different products from the peptide bioregulator line can also be used simultaneously.

Garmonia is a company certified and registered by the Russian government as a reliable producer. The production process takes place according to the guidelines of Good Manufacturing Practice (GMP) and according to international guidelines for production and quality control for medicinal products for human use.

For general use, in the absence of specific indications, take 2 capsules per day for 10 days (one package). Repeat once every 6 months. Where demand exists or in case of specific indications, use may be intensified. The same protocol may be repeated once a month or once every 2 or 3 months. Several products from the Peptide Bioregulator product may be used simultaneously. Caution: Do not use during pregnancy or breastfeeding. Always consult your doctor in case of a medical indication.