By: Nutramin
Be the first to review this product
Skip to the end of the images gallery 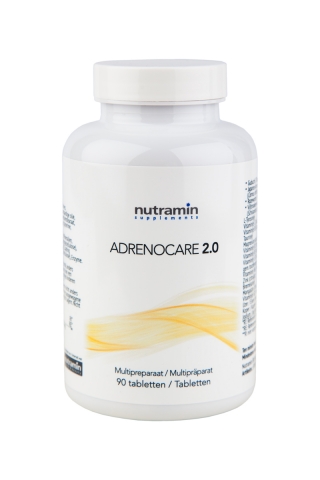 Adrenocare 2.0 - 90 tb
Skip to the beginning of the images gallery

Adrenocare 2.0 is a powerful preparation with herbs, vitamins and minerals. It contains a proprietary herbal blend consisting of extracts of the leaf, root or kernel of various adaptogenic herbs, such as Basil (Ocimum basilicum), Gotu Kola (Centella asiatica), Guduchi (Tinospora cordifolia), Japanese Dogwood (Cornus officinalis), rose root (Rhodiola rosea) and five-flavored fruit (Schisandra chinensis). Rhodiola is also called Sedum rosea or rose root and has been used for centuries in all kinds of cultures for various purposes. Rhodiola rosea contributes to normal resistance to stress, is good for mental balance and is good for the functioning of the nervous system*, health claims pending approval by the European Commission. The other herbs have also been chosen for their unique properties. Adaptogenic herbs support your body with various needs.

In addition, Adrenocare 2.0 contains various additional ingredients that support the nervous system, such as the minerals zinc, iodine and iron and vitamins B1, B3, B6 and C. Vitamin B5 contributes to normal synthesis and metabolism of steroid hormones, vitamin D and some neurotransmitters. In addition to the rich amount of essential vitamins and minerals, the digestive enzyme bromelain and the amino acid L-tyrosine have also been added. L-tyrosine is an important precursor of L-DOPA, dopamine and noradrenaline in the body. It is an important building material.

* This health claim is pending approval by the European Commission.

Nutramin Adrenocare 2.0 is a very complete and sophisticated formula. The nutrients, such as the adaptogenic herbs, are very safe to use. They should never disturb your body. The herbs all have a long-term use for various applications, for example in Ayurveda. Nutramin Adrenocare 2.0 is suitable for anyone aged 18 and older who can use extra support for some time, for example during busier periods. The standard dose is one tablet three times a day. Adrenocare 2.0 can be combined well with other Nutramin products such as Adreno Balance, Gland Adrenal, Mg 100 Natural and Stress Balance for extra powerful support.

EU Norm
*RDA = Recommended Daily Allowance
Instructions
Storage: see label. Keep out of the reach of children. Consult an expert before use in case of pregnancy, breastfeeding, illness or medication.
Write Your Own Review