By: Rosita Real Foods
Rating:
100% of 100
1  Review Add Your Review
Skip to the end of the images gallery 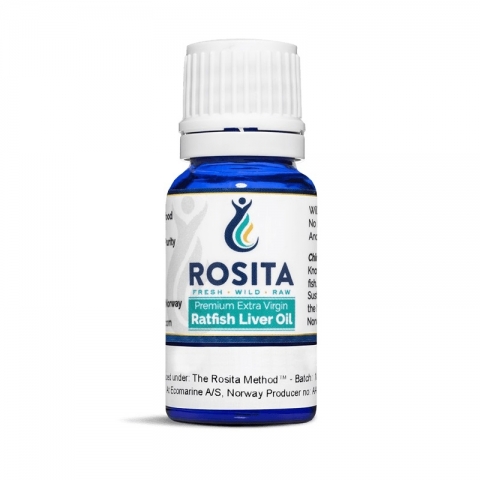 The use of cod liver oil of certain shark species was ubiquitous among ancient Scandinavian peoples. It was believed that this oil had strengthening, healing and body-protecting properties. Only recently have biochemists found compounds in cod liver oil supporting this traditional belief in its potency, namely the alkylglycerols. These are substances also abundantly present in breast milk and that support the immune system*.

The cod liver oil of the American ratfish is a rich natural source of alkylglycerols, as well as vitamins A and D and omega-3 fatty acids. Rosita Real Foods™ Extra Virgin Ratfish Liver Oil (RFLO) is very likely the rarest and most authentic ratfish cod liver oil in the world. The cod is extracted according to ancient principles through a patented extraction process barring the use of heat, chemicals and mechanical pressure. The ratfish is caught sustainably off the coast of Norway and processing of the liver is tightly controlled.

The power of cod liver oil

Rosita’s high-quality cod liver oil is particularly rich in vitamins A and D, iodine, phosphorus, omega-4, 6, 7, 9, 11 fatty acids and in omega-3 fatty acids such as EPA (eicosapentaenoic acid) and DHA (docosahexaenoic acid). Vitamin A plays a role in the cell differentiation process, helps to see normally, is important for the skin, benefits the mucous membranes and, like vitamin D, supports the immune system.

Vitamin D also benefits the calcium balance and the skeleton of children, helps the cell division process and is important for both teeth and muscles. Iodine supports the normal growth of children, supports the energy metabolism and the thyroid gland, benefits mental focus and the nervous system and is important for the skin. Phosphorus also supports the teeth and bones of children and promotes energy metabolism. Both the fish fatty acids DHA and EPA together benefit blood pressure, heart, brain and vision.

During the 1950s, almost every child was given a daily spoonful of cod liver oil during the winter months, an oil that many still remember as that filthy stuff of childhood. It served mainly to support resilience and as a remedy for “the English disease”, or rickets (bone deformity), in children.

From the moment vitamin D was added to products such as margarine during the 1960s, the use of cod liver oil slowly disappeared from our daily eating routines. Today, however, the oil is back in the spotlight. The use of cod liver oil dates back to the Vikings era (700-1100 AD), when it came to be called 'the gold of the ocean'.

Rosita Real Foods cod liver oil is still made through the ancient and natural method of production used by Viking Druids, making it the most authentic and unique cod liver oil available. Sometimes cod liver oil is confused with whale oil, used from the 17th well into the 19th century for making soap and lamp oil, and obtained from whale blubber.

Cod liver oil is a type of fish oil, but fish oil is not the same as cod liver oil. What exactly are the differences? Fish oil is a broader term and is especially popular due to the fact that fish oil is a rich source of the omega-3 fatty acids DHA and EPA. Cod liver oil also contains these fish fatty acids, but in addition is rich in vitamins A and D and in other important nutrients including phosphorus and iodine. Cod liver oil is actually the richest and most natural form of fish oil. The oil is, after all, not refined and is obtained strictly from the livers of fish like cod, haddock and halibut./p>

With regular fish oil, on the other hand, the entire fish is pressed, after which the oil is extracted, purified and then often enriched with vitamins. Cod liver oil in its purest form is colorless or light yellow and has the scent of fresh or smoked fish. Because cod liver oil is rich in vitamin D, it is often given to children, due to the fact that vitamin D is important for the teeth, benefits the skeleton of children and supports the immune system. Vitamin A in cod liver oil also supports the immune system and the vitamin also benefits eyesight and skin, and it plays a role in the cell differentiation process.

Rosita Real Foods is known worldwide for its pure, natural, cold-pressed and first-pressing oils. For the manufacture of the oil Rosita follows a patented method that deliberately does not use heat, high pressure or metal. The extracted oils are very delicate and in order to maintain their quality, they should not be exposed to heat, pressure, air or metals during the extraction process. The wild-caught fish, which is exclusively harvested from the pristine Norwegian waters, is carefully processed, with every batch carefully checked. Only the best livers are selected for further processing.

The oil is naturally extracted using the same artisan method used by our Norwegian ancestors hundreds of years ago. The process is constantly monitored to ensure that the oils retain their freshness and pure quality. In addition, all Rosita Real Foods products are independently tested for purity and nutrient values. Since it is a pure and unprocessed product, each batch has a natural variation in the concentration of nutrients. Rosita Real Foods is proud of the fact that they are the only company to be having the permission of the Norwegian Institute of Food, Fisheries and Aquaculture Research to give its products the 'extra virgin’ label.

Rosita Real Foods was co-founded by an Englishman and a Norwegian who decided to take matters into their own hands after failing to find a high-quality cod liver oil. The company is characterized by its passion for the old craft, by its pursuit of quality and its environmental ethics. Rosita Real Foods is the only producer worldwide of handcrafted, authentic extra virgin cod liver oil.

With an ethos that revolves around preserving ancient traditions as well as nature, and the uncompromising ambition to create superior products, the company has worked with a variety of committed companies, universities and research institutes. This eventually led to the development of its flagship product Rosita Extra Virgin Cod Liver Oil, a 'live' oil extracted from cod that is wild and abundant in the pure waters of Norway. Because the company keeps tight control over production from fishery to end product, it is able to offer authentic products and provide assurances about the high quality.

EU Norm
*RDA = Recommended Daily Allowance
Other Ingredients
Allergens
Fish
Instructions
Storage: see label. Keep out of the reach of children. Consult an expert before use in case of pregnancy, breastfeeding, illness or medication.
Write Your Own Review
Customer Reviews