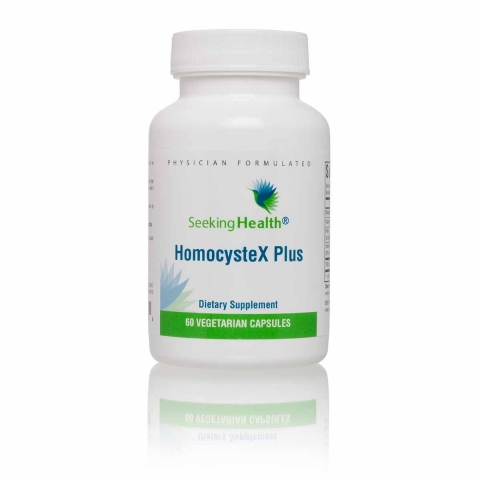 HomocysteX Plus by Seeking Health

Seeking Health’s HomocysteX Plus is a vitamin B complex consisting of the four essential B vitamins: riboflavin (B2), vitamin B6, folate (B11) and vitamin B12. The blend aims to support energy metabolism*1, the cell division process*2 and the metabolism of proteins and glycogen*3. These processes are related to the process of methylation, which involves the transfer of methyl groups from one molecule to another and which constantly takes place in your body. In contrast to the equally popular Seeking Health supplement HomocysteX, this supplement includes betaine or trimethylglycine (TMG), a leading methyl donor.

In recent years, more and more attention has been paid to the relationship between methylation and our health. Methylation is nothing more than the coupling of one molecule to a group of other molecules so that a process can take place. This biochemical process takes place in every cell of our body and is essential for the release of energy. If this coupling process is too slow, it will affect all processes in your body. Fortunately, at such a moment 'auxiliary forces' can be called upon by your body, the so-called methyl donors. B vitamins, including vitamins B2 (riboflavin), B6, B11 (folate) and B12 are examples of methyl donors and therefore play an important role in energy metabolism. The B vitamins B2 (riboflavin), B6, B11 (folate) and B12 present in this supplement contribute to the energy-yielding metabolism and the metabolism of proteins and glycogen, help the cell division process, contribute to a clear mind, and more. The added betaine (TMG) is formed from choline, also known as vitamin B4. Choline plays a role in the production and breakdown of homocysteine.

* 1 B vitamins, including vitamins B2, B6 and B12, promote energy metabolism

* 3 Vitamin B6 contributes to normal protein and glycogen metabolism