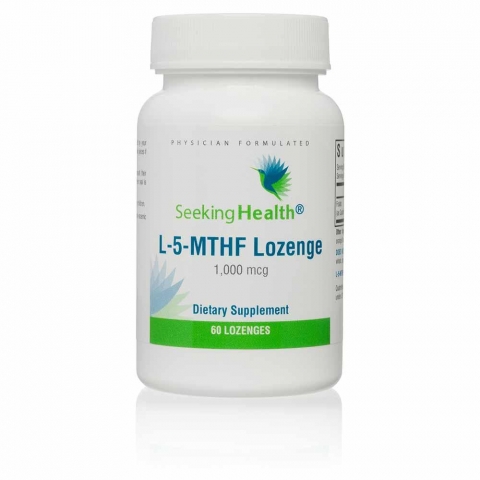 Seeking Health’s L-5-MTHF is a source of the bioactive, methylated form of folate, offered in the form of Quatrefolic®, the fourth generation folic acid. This form is known for its bioavailability, safety and stability. It contains 1000 mcg of folate per lozenge. Folate is a water-soluble B vitamin naturally found in foods such as citrus fruits, dried beans and peas. This methylated form (L-5-MTHF) does not require metabolic conversion within the body, which is particularly beneficial for people with absorption or metabolic problems. Are you looking for a non- methylated form of folate that is still well-absorbed by the body? Consider Seeking Health’s Folic acid - Lozenges or Folinic acid - Capsules.

The importance of folate

Folate, also called vitamin B9 or B11, has a number of essential functions in the body. Folate contributes to normal cell division, supports the production of red and white blood cells, helps the immune system, contributes to mental resilience, helps fight fatigue, plays a role in the production and breakdown of homocysteine, and contributes to normal amino acid synthesis. In recent years, the active form of folic acid has become increasingly preferred over regular folic acid, because conversion of folic acid to 5-MTHF (the active form of folic acid) proves difficult in a relatively large number of people. In this supplement the choice has been for a methylated form of folate, which goes by many names, including L-methylfolate or L-5-MTHF. Side effects may occur when using L-methylfolate for the first time, so it is advisable to consult a doctor or specialist before use. Seeking Health’s lozenges are free of the most common allergens and are suitable for both vegetarians and vegans.

Epigenetics refers to the myriad factors that influence our gene expression. The name epigenetics was coined in 1942 by biologist Conrad Waddington and literally means 'around the DNA', referring to the markers around the DNA that can turn genes on and off. The idea behind it is that the experiences, living conditions and nutrition of an organism have a major modulating influence on its genetic predisposition. For Dr. Ben Lynch, epigenetics stands for the power of our genes and for the fact that we are not our DNA, but that we can work with our genes and just need to know how to shape this cooperation. The Lynch method is therefore aimed at our DNA markers (also called SNPs or single nucleotide polymorphisms). By using supplements and making adjustments in diet and lifestyle, we can aim to 'clean up dirty genes', in Lynch's words.

From an early age, Dr. Ben Lynch, founder of Seeking Health, interested in the relationship between health and gene expression and has studied natural medicine, molecular biology and epigenetics, among other things. In his recent book Dirty Genes he describes how having 'contaminated' genes can be the cause of countless health problems and shows how you can optimize the functioning of your genes through the right diet and lifestyle. He helped in recent years thousands Clients, physicians and health care professionals in the use of these insights and is therefore currently one of the most consulted experts in the field of epigenetics.

* L- methylfolate is the active, methylated form of folic acid. Folic acid is good for the cell division process and contributes to normal blood formation