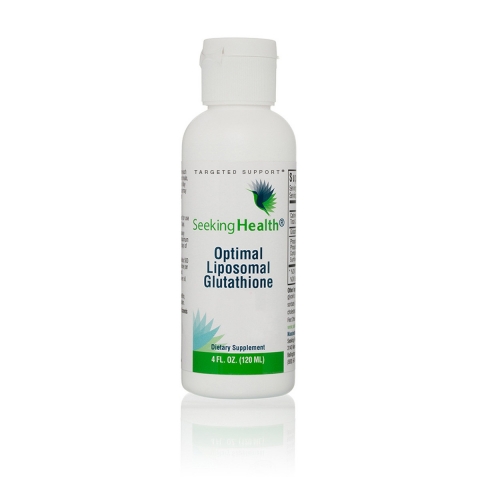 Optimal Liposomal Glutathione
Skip to the beginning of the images gallery

Seeking Health’s Optimal Liposomal Glutathione offers a dose of 500 mg of reduced glutathione, an antioxidant found naturally in relatively high concentrations in all living organisms and in all body cells. Glutathione exists in the body in either a reduced form (GSH) or oxidized form (GSSG). The reduced bioactive form is preferred for supplementation. However, for a long time this form was not well absorbed by the body upon oral ingestion, because glutathione is broken down already in the digestive tract. Liposomal glutathione , however, offers the reduced variant of glutathione in unique form to protect during digestion. Liposomes ensure that glutathione is delivered directly into the bloodstream, avoiding degradation by the digestive system. Seeking Health produces its liposomes from GMO-free sunflower oil; the product is also free from soy.

Glutathione was first described in 1921 and its structure was definitively established in 1935. It is a tripeptide that can be produced by the body itself from the amino acids cysteine, glycine and glutamine. Glutamine contributes to a properly functioning immune system* and supports the body’s energy metabolism*. Glutathione is the main endogenous substance the body deploys for its cellular protection mechanism, and therefore resides in almost all bodily cells. In order to be able to fulfill its functions there, a reduced form of the molecule is a necessity. The highest concentrations can be found in the liver and lungs, but with aging and lifestyle factors, bodily glutathione levels decrease. The power of glutathione lies in the sulfur groups it contains.

‡ Percent daily values ​​are based on a 2000-calorie diet.