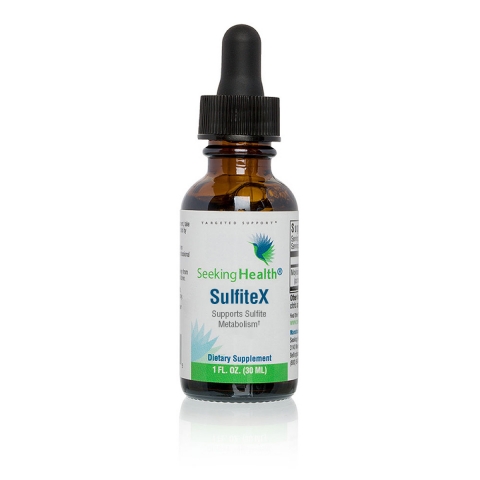 SulfiteX - Drops
Skip to the beginning of the images gallery

Seeking Health’s SulfiteX contains 25 mcg of molybdenum per serving, in the mild form of molybdenum glycinate chelate. The supplement comes in a handy liquid form that makes dosing easy. Molybdenum is one of the essential trace elements that we need in small quantities every day to function properly. It contributes to a normal sulfur amino acid metabolism, among other functions. The supplement is suitable for both vegetarians and vegans and is free from the most common allergens, such as milk, eggs, fish, tree nuts, peanut yeast and soy. The recommended amount is one drop per day, unless otherwise advised by a health professional.

Molybdenum is one of the lesser known minerals and it is a trace element that has only recently been considered essential. It is involved in many processes in the body and contributes to the normal sulfur amino acid metabolism, among other functions. In addition, molybdenum is part of a number of different enzymes involved in energy metabolism and in the build-up and degradation of bodily proteins. The trace element is especially abundant in cereals, legumes and nuts; organ meats, milk and eggs are also good sources of molybdenum. The percentages of molybdenum in food depend on the molybdenum content and the acidity of the soil on which it is grown. In some places the molybdenum levels in the soil are low. As with most newly discovered trace elements, no recommended daily allowance has yet been set for molybdenum, although it has been established by the EU that doses of up to 600 mcg of molybdenum per day are considered safe for adults.