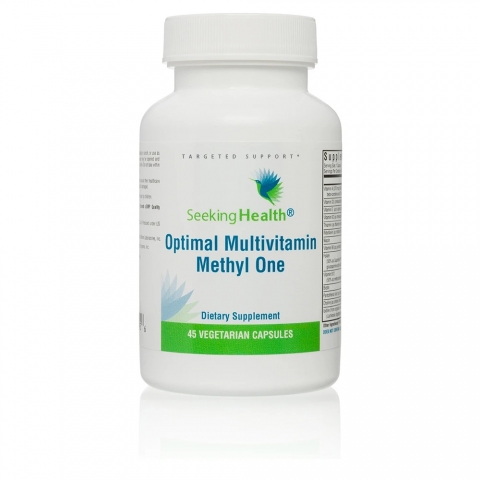 Seeking Health’s Optimal Multivitamin Methyl One is a multivitamin that offers a wide variety of nutrients in easily absorbable or active forms. Unlike other Seeking Health multivitamins, this formula combines everyday essential vitamins, minerals, trace elements and other nutrients in a single capsule, so you have to take only one capsule once daily. The formula contains methylated B vitamins, including methylcobalamin and methylfolate, which do not need to be converted by the body first. In addition, this multivitamin contains folate in both the non-methylated form of folinic acid and the methylated form L-5-MTHF. This blend of folates plays well with amino acids and minerals such as copper, magnesium and iodine.

One Daily formula, for every day

Optimal Multivitamin by Seeking Health contains vitamins A, B6 and D, selenium and zinc to support immune functions; B-vitamins, iodine and manganese to promote energy metabolism; and vitamin D to support bones, teeth and muscles. In addition, B vitamins contribute to a clear mind and support the nervous system. The added substance lutein supports the condition of the eye*3 and possibly has an anti-oxidative action within the body*3. BioPQQ® is a vegetable antioxidant that falls under the polyphenols while SOD (Superoxide Dismutase) is an enzyme that occurs in all living cells and which, being an enzyme, brings about or accelerates certain bodily reactions. The minerals and trace elements in this multivitamin have forms known to be easily absorbed by the body, including as chelates and citrates. Also, the formula comprises vitamin B12 in two “coenzyme-forms" (methyl-cobalamin and adenosyl-cobalamin), also known as the active forms of vitamin B12.

* 1 Vitamin A, B6, D, selenium and zinc support the immune system

Take 1 capsule daily with breakfast or lunch, or use as directed by a healthcare professional. Capsules may be opened and nutrients taken separately or sprinkled into food or drink. Do not take within 5 hours of bedtime as it may interfere with sleep.