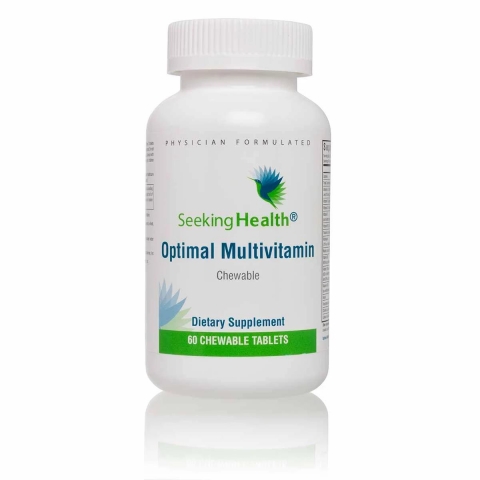 Seeking Health’s Optimal Multivitamin is a multivitamin that offers a wide variety of nutrients in easily absorbable or active forms. The formula consists of a combination of 28 important vitamins, minerals, trace elements and other nutrients and contains more vitamins C and E than usual. This multivitamin contains both folate and vitamin B12 in their 'coenzyme forms', which means that they already have the same shape as they do in your body: they no longer need to be converted. Although the formula is suitable for and specifically aimed at children ages 4 years and up, it is advisable to consult a doctor before using this product. The handy chewable tablet form makes the multivitamin particularly easy to use and is also suitable for adults who have difficulty swallowing pills.

Chew vitamins for every day

Seeking Health’s Optimal Multivitamin contains vitamins A, C, and B6, selenium and zinc to support the immune system, as well as B vitamins, magnesium and manganese to promote energy metabolism. In addition, B vitamins, vitamin C and magnesium contribute to a clear mind and support the nervous system. The enriched substances lutein and zeaxanthin support the condition of the eye*3 and may have an antioxidant effect in the body*3. The minerals and trace elements come in forms known to be easily absorbed by the body, such as chelates and citrates. The formula also contains folate and vitamin B12 in their 'coenzyme forms' methylfolate, methylcobalamin and adenosylcobalamin, also known as the active forms of folate and vitamin B12.

* 1 Vitamin A, C, B6, selenium and zinc support the immune system

‡ Percent Daily Values are based on a 2,000 calorie diet.

Quatrefolic® is a registered trademark Gnosis S.p.A. Produced under the US Patent 7,947,662.

SelenoExcell® is a registered trademark of Cypress Systems, Inc.