By: Seeking Health
Rating:
80% of 100
1  Review Add Your Review
Skip to the end of the images gallery 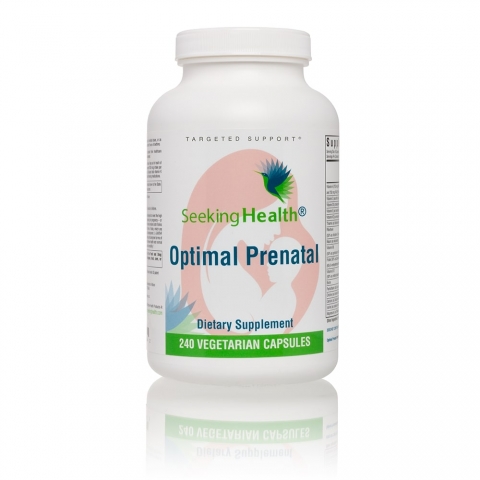 Seeking Health Optimal Prenatal is a comprehensive prenatal formula with a unique blend of minerals, vitamins and amino acids. The formula has been specifically designed to meet the increased nutritional needs of women who are pregnant or preparing for pregnancy. Also taken into account are the digestive sensitivities that may occur during pregnancy. For example, this product does not contain iron, because not all women can process this equally well and not all women can use it. L-5-MTHF has been added as the patented enzyme Quatrefolic®, the most bioavailable and a methylated form of folic acid, which has a beneficial effect on the cell division process.

This complex Optimal Prenatal formula is packed with powerful ingredients. The supplement not only contains the methylated form of folate (L-5-MTHF), it also contains folinic acid, the non-methylated variety that can be converted by the body. This blend of folates works well with amino acids and in minerals such as copper, magnesium and iodine. Iodine is added to support the synthesis of the nerve cell structure while magnesium benefits the muscles and state of mind. The formula also contains vitamin A, indeed in two forms (beta-carotene and retinyl palmitate), as well as B vitamins (including the active forms of riboflavin and B6) which help fight fatigue, contribute to mental resilience and support the immune system. Also unique to this formula is the addition of Coenzyme Q10 (CoQ10) and the spice ginger, which supports digestion*3 as well as proper stomach functions during periods of morning sickness*3.

* 1 Calcium, folate, magnesium, zinc, and vitamins A, B12 and D benefit the cell division process

Quatrefolic® s a registered trademark of Gnosis S.p.A. Geproduceerd under US Patent 7,947,662.

SelenoExcell® is a registered trademark of Cypress Systems, Inc.

Diet
Vegetarian
Allergens
None
Instructions
Storage: see label. Keep out of the reach of children. Consult an expert before use in case of pregnancy, breastfeeding, illness or medication.
Write Your Own Review
Customer Reviews