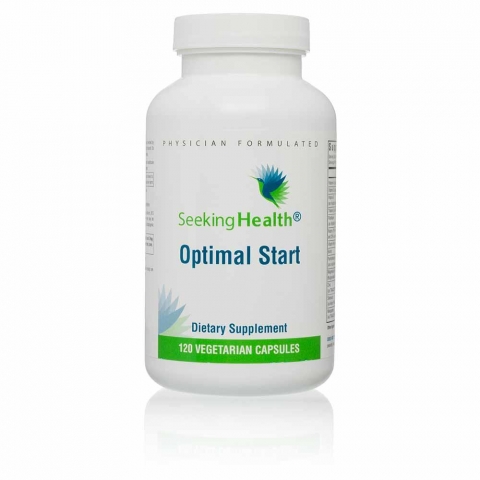 Seeking Health’s Optimal Start is a unique multivitamin that combines essential vitamins and minerals with adaptogenic herbs, with the whole of substances interacting in a synergistic manner. The formula was specially designed by Dr. Lynch for people sensitive to methylated nutrients, certain minerals and stress. The formula therefore does not contain methylfolate, vitamin B12, copper, iodine, calcium or iron. The blend is fortified, however, with shilajit, ashwagandha, ginseng and CoQ10. This multivitamin is suitable for vegetarians and is free from the most common allergens.

Vitamins and herbs for a good start

Seeking Health’s Optimal Start contains vitamins A, C, vitamin B6, selenium and zinc to support the immune system, as well as B vitamins, magnesium and manganese to promote energy metabolism. In addition, B vitamins, vitamin C and magnesium contribute to a clear mind and support the nervous system. The herb ashwagandha, added for enrichment, restores balance in stress situations*4, protects against aging symptoms*4 and protects cells against harmful external influences*4. Ginseng is included to protect healthy cells and tissues*4 and to support the immune system*4. It also boosts energy*4, helps fight fatigue*4 and enhances mental focus*4. Finally, characteristics of this formula are the unique shilajit extract, the addition of coenzyme Q10 (CoQ10), and the high dose of vitamin C.

* 1 Vitamin A, C, B6, selenium and zinc support the immune system

§Albion® and TRAACS® are registered trademarks of Albion Laboratories, Inc.

EU Norm
*RDA = Recommended Daily Allowance
Other Ingredients
HPMC (capsule), ascorbyl palmitate, medium-chain triglycerides, L-leucine, and silica.
Diet
Vegan, Vegetarian
Allergens
None
Instructions
Storage: see label. Keep out of the reach of children. Consult an expert before use in case of pregnancy, breastfeeding, illness or medication.
Write Your Own Review