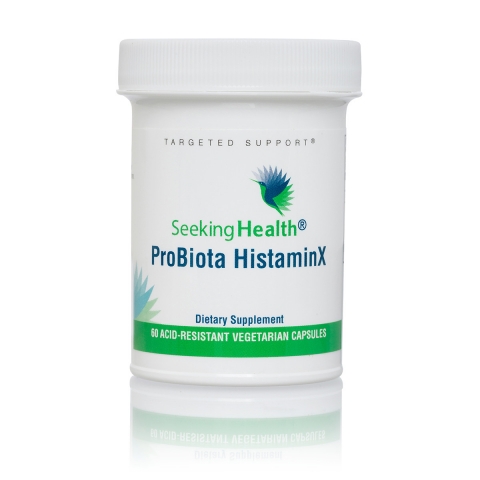 ProBiota HistaminX
Skip to the beginning of the images gallery

Seeking Health's ProBiota HistaminX contains probiotic strains of bacteria that have been carefully selected and are known not to increase histamine levels in the gastrointestinal tract. The histamine-friendly bacteria in this formula are encased in acid-resistant, vegetable capsules that regulate release by slowing it down. This ensures that intact probiotics can be delivered to the terminal (distal) parts of the intestinal tract. The probiotic supplement contains 10 million CFUs of bacteria cultures and is suitable for people dealing with histamine intolerance as well as for vegetarians and vegans. The formula is also free of the most common allergens.

Histamine and our intestines

Histamine is a biogenic amine that occurs naturally in both plant and animal products. The substance can also be produced by bacteria and occurs in low amounts in our body, where it has a function in, among other areas, the immune system, the gastrointestinal tract and stimulus transfer in the brain. Once formed, it can be stored in mast cells or white blood cells and is released in certain immune responses, such as in the case of allergies, inflammation and/or drug use. In some cases the breakdown and exposure to histamine is unbalanced, including when there is a histamine intolerance, where the body makes too much histamine itself or when too much histamine-rich foods are consumed. Seeking Health's ProBiota HistaminX can rightly be called a 'histamine-friendly' probiotic supplement, as it contains only strains of bacteria known not to increase histamine levels in the gastrointestinal tract.

Take one capsule any time of day with or without food or as directed by your healthcare professional.

† At the time op production.