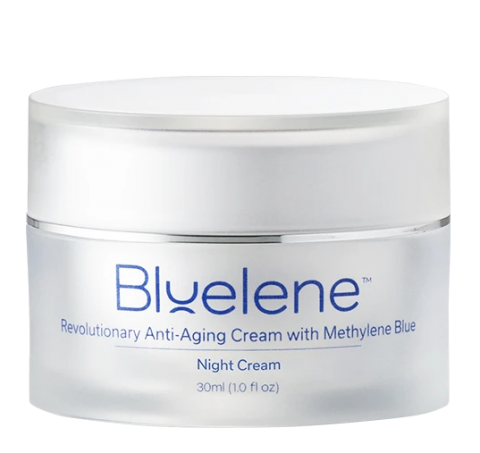 Bluelene® Night Cream is a moisturizing and nourishing night cream with a light texture and the unique ingredient methylene blue. This special ingredient makes this cream from Mblue Labs™ a revolutionary anti-aging formula. Methylene blue is a special substance researched by Mblue Labs for its skin- firming and skin-rejuvenating properties. Bluelene® Night Cream was developed based on a unique, patented formula: it does not contain parabens or perfume and is suitable for all skin types.

Understanding the mysteries of Mother Nature often takes a long and dedicated process of scientific inquiry. Dr. Kan Cao, founder of Mblue Labs™ (the manufacturer of the Bluelene® creams) spent years in the laboratory building her career around the skin aging process. Cao received her PhD from Johns Hopkins University in 2005 and currently works as a professor at the University of Maryland. She is one of the world's leading aging experts and discovered the effect of the special substance methylene blue on skin aging. She developed a unique product line, Bluelene® skin creams, based on a patented formula including methylene blue.

Methylene blue is a common colorant used in a variety of applications. In her laboratory Dr. Cao discovered that this substance has effective and broad-spectrum anti-aging properties for the human skin. Methylene blue is a powerful antioxidant in nanomolar concentrations. The compound fights the skin aging process in several ways and makes for a revolutionary innovation in skin care. Oxidative stress is one of the main causes of skin aging. The use of antioxidants in skin care is therefore widely accepted as an effective approach to visibly reduce the skin’s aging process.

Rediscovery of an ancient compound

Methylene blue was first synthesized in 1876. It is a diamino phenothiazine that influences, among other processes, the electron transport in the body. Methylene blue can enter the intracellular compartments such as mitochondria, lysosomes and cell nuclei. Dr. Cao’s discovery of the effects of methylene blue on skin aging was published in Nature Scientific Reports and has enjoyed wide acclaim by the scientific community. Cao also became a finalist at the University of Maryland for Invention of the Year. Her discovery was duly featured in many major media outlets, including Cosmetics Design and Allure.

The importance of a good night cream

The skin is the largest and most visible organ in the human body. Psychologically it is an important part of the body image of both men and women. Skin aging is usually visible. We often try to make the skin more beautiful with make-up and care products. Skin aging can be intrinsic and caused by physiological factors, but it can also be caused extrinsically, by environmental factors. Intrinsic skin aging entails all natural changes in the skin as we age. Extrinsic skin aging is an accelerated form of aging as a result of exposure of the skin to environmental factors such as smoke, sunlight or air pollution. Although both forms are different, they have in common that skin aging is related to oxidative stress by free radicals. The revolutionary Bluelene® Anti-aging Night Cream nourishes the skin during the night.

Mblue Labs™ was founded by Dr. Kan Cao, one of the world's leading scientists in the field of aging research. Dr. Cao spent most of her career in the laboratory, studying the process of aging. She received her PhD in 2005 from Johns Hopkins University and currently works as a professor at the University of Maryland. Cao rediscovered methylene blue as a substance with strong anti-aging properties benefitting the human skin. With her company Mblue Labs™ Cao developed a special product line based on the special ingredient methylene blue, called Bluelene® skin creams. The creams are completely free from parabens and perfumes.

After cleansing your skin, apply a thin layer to face and neck at night . Can be used as a night and day cream.