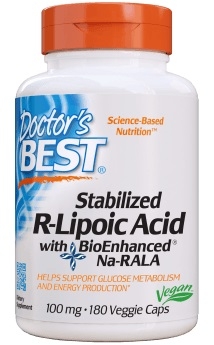 Doctor's Best's R-Alpha Lipoic Acid contains a combination of dextrorotatory (R) alpha lipoic acid and biotin. R-alpha lipoic acid is a fatty acid that occurs naturally in every cell of the body, where it plays a vital role in energy metabolism. Biotin, or vitamin B8, belongs to the B vitamins and is the beneficiary of various health claims. The two ingredients together form a powerful synergy.

R-alpha lipoic acid is a natural substance first isolated in 1951. At first it was thought to be a B vitamin; it later turned out to be a sulfur-containing fatty acid and antioxidant. As a nutrient, it has powerful and unique characteristics. The antioxidant is both water- and fat-soluble. This molecular capacity renders R-alpha lipoic acid available to almost all body systems. As we age, the endogenous ability to synthesize alpha lipoic acid diminishes.

R-alpha lipoic acid is a molecular multitasker catering to a wide variety of functions. Because the human body itself can produce small amounts, it is seen as a condition-specific nutrient. This means that you must ensure adequate intake either through food or nutritional supplements. R-alpha lipoic acid is found in small amounts in the diet, notably in organ meats. It is well absorbed from the gastrointestinal tract and can easily disperse throughout the body.

Doctor's Best almost exclusively uses proprietary and standardized brand sources of official trademarks that have been thoroughly researched as they appear in products. The authenticity of these ingredients is guaranteed in all products. Doctor's Best never uses second-choice alternatives. This results in a qualitatively superior line of supplements with outstanding bioavailability levels.

Take 1 capsule daily preferably on an empty stomach or as recommended by a healthcare practitioner.