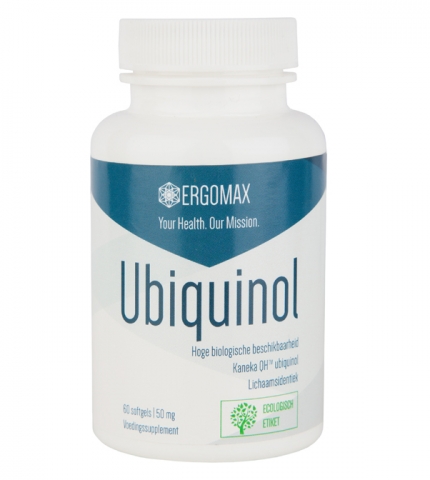 Ubiquinol - Kaneka QH®
Skip to the beginning of the images gallery

Ubiquinol is a specific and effective form of coenzyme Q10 (ubiquinone). Ubiquinol Q10 is a fat-soluble, vitamin-like substance found in every cell of the body. The body in part synthesizes ubiquinol and for another part acquires it from food or supplementation. Our own production decreases with age. The main function of ubiquinol Q10 is that of a cofactor in energy production (ATP) inside the mitochondria, the energy factories of the cell. Ubiquinol is also a strong antioxidant.

The name ubiquinone is derived from the Latin word ubique, meaning 'everywhere'. Ubiquinol differs from ubiquinone in that ubiquinol is already bioactive and no longer needs to be converted in the body. Ubiquinol from the patented Kaneka QH® is therefore very absorbable and very stable. It is readily available for use by the body and works very effectively; 150 mg of ubiquinol equates to a whopping 1200 mg of CoQ10.

Difference between ubiquinol and ubiquinone

Co-enzyme Q10 supplements (ubiquinone) first need to be converted to ubiquinol. This conversion process is not 100 percent efficient. Aging and lifestyle factors have an important influence on it. To circumvent this conversion and to take full advantage of coenzyme Q10, taking ubiquinol directly is a smart choice. Documented is that 150 mg of ubiquinol corresponds to no less than 1200 mg of coenzyme Q10.

The ubiquinol in this Ergomax product is derived from patented Kaneka QH®, produced by the Japanese company Kaneka. Kaneka started its product line in 1977 with Kaneka Q10® (coenzyme Q10). It took a long time for ubiquinol to be produced on a large scale because it oxidizes quickly when exposed to air or light. Kaneka therefore spent over a decade researching the breakthrough food ingredient ubiquinol before it hit the market.

In 2007, 30-odd years after the introduction of coenzyme Q10, Kaneka launched its next generation coenzyme Q10 product, Kaneka Ubiquinol™, based on a solid and patented production process. As a leading developer of unique food ingredients, Kaneka guarantees safety, reliability, quality and purity.

Kaneka Ubiquinol™, or Kaneka QH®, is the world's first and only ubiquinol available as a food ingredient. It is derived from Kaneka Q10™, the only all-natural yeast-fermented and bio-identical CoQ10. Kaneka Ubiquinol is the reduced, actively antioxidant form of coenzyme Q10 and is highly absorbable. This means that optimal levels of CoQ10 can be achieved both quickly and efficiently.

Ubiquinol is endogenous to the body

Ubiquinol occurs naturally throughout the body. About 90% of coenzyme Q10 in the blood consists of the ubiquinol form. CoQ10 and ubiquinol belong to the group of organic substances known as 'quinones'. Kaneka ubiquinol is completely natural and body-identical. Ubiquinol not only plays an important role in the cell’s energy production, but is also a powerful antioxidant. People aged 40 and over, (active) athletes and people who can use additional support with ubiquinol, often choose a ubiquinol supplement.

Coenzyme Q10, Q10 for short, and also known as CoQ10 or ubiquinone-10, was discovered in 1957 by Professor Fred L. Crane and colleagues at the University of Wisconsin-Madison. Shortly thereafter, the chemical structure was established by Professor Karl Folkers and associates at Merck. It was not until the 1980s that research on CoQ10 got off to a proper start. The main stimulus was the fact that Japanese pharmacists had started producing the substance commercially. CoQ10 is now the subject of more than 3000 studies, showing a wide range of application areas and properties.

Our mission is optimal health, for everyone. Ergomax spends substantive time and care researching new effective substances and products, including niche products. We offer natural food supplements in combination with professional advice. All of our nutraceuticals have been carefully selected and tested. This also applies to Ergomax's own product line. Products and compounds are as natural as possible. Mother Nature always knows better, we say. Our dietary supplements are composed to meet one thing: our customers’ high expectations.