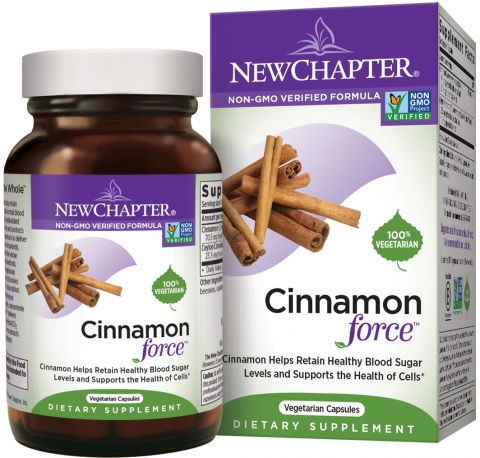 Cinnamon Force™
Skip to the beginning of the images gallery

New Chapter's Cinnamon Force™ is a strong, whole food antioxidant that helps maintain healthy blood sugar and keep your cells healthy. Cinnamon has the unique property of supporting the natural conversion of glucose into your body's energy. It also helps maintain or achieve a healthy body weight because sugars (glucose) are directly converted into energy rather than as fat reserve.

This full-spectrum supplement draws its strength from two types of cinnamon, each of which provides a different extract allowing you to make optimal use of the medicinal effect of this unique spice. Cinnamon Force™ not only has a beneficial effect on glucose balance, but also on cholesterol levels. Therefore, it is an excellent addition for people who seek to adjust their diet or lifestyle to a cardiovascular regimen. For Cinnamon Force™, New Chapter extracts the cinnamon bark the traditional way, so that practically nothing is lost of its natural strengths.

We all know cinnamon as that wonderfully fragrant spice for the kitchen. In Chinese medicine, cinnamon has been used for thousands of years because of its various medicinal properties, and Western science is also taken an interest in these. The cinnamon tree grows in tropical countries; the spice is made from the shoots of the tree. The inner bark of these shoots are harvested and dried, causing them to curl up to form the well-known cinnamon stick.

For Cinnamon Force™ New Chapter uses the entire bark of two varieties: ceylon cinnamon (Cinnamomum zeylanicum) and cassia cinnamon (Cinnamomum cassia). The bark is extracted the traditional way, so that the natural potency is preserved. The typical scent of cinnamon derives from the the bark oils, where the active substances are mainly located. The most common substance in the oil is cinnamaldehyde B1, which can help lower glucose levels in the bloodstream. Cinnamaldehyde B1 stimulates the insulin receptors, making it easier for cells to use dietary glucose. Research showing that cinnamon improves the action of insulin on muscle and fat cells, rendering glucose uptake up to 20 times faster.

It has recently been discovered that cinnamaldehyde also prevents the formation of the enzyme aldose reductase. This enzyme converts glucose into sorbitol, which plays a harmful role in insulin resistance and diabetes. The substances catechin and epicatechin found in cinnamon also appear to have a positive influence on the insulin-glucose metabolism. Due to its positive effect on all aspects of insulin, glucose and fat metabolism, cinnamon is very suitable for use for people dealing with insulin resistance or high glucose levels.

Cinnamon is a source of dietary fiber, polyphenols, antioxidants and minerals including manganese, calcium and iron. In addition, it contains eugenol (the fragrance and flavoring also found in cloves, which also has a mild analgesic effect), coumarin, tannin, OPCs (powerful antioxidants fighting oxidative stress, for example) and diterpenes. Many spices are known in alternative medicine for their help in fighting bacteria and fungi. Cinnamon is one of the powerhouses in this area. It was scientifically proven already 40 years ago that the cinnamaldehyde in cinnamon prevents the growth of harmful fungi, which makes it useful, for example, for tackling candida infections. Traditionally, cinnamon has also been recommended for gastrointestinal complaints including dyspepsia (nausea, flatulence, intestinal cramps, acid reflux) and diarrhea. Finally, it is a strong antioxidant that fights harmful free radicals in our body and has anti-inflammatory properties.

New Chapter has been nourishing body, soul and earth for over 35 years with high-quality, natural products. This American brand only creates products that write a new chapter, either as improvement of an existing product or because they can make a unique contribution to complementary health care. They choose safe products that can be used with confidence and that contribute to health, society and planet. New Chapter is produced by a Certified B Corporation, meaning they keep people, planet and profit in a perfect balance.

New Chapter supplements nourish the body and mind with herbs and pure, unprocessed and unrefined whole foods, without additives. The brand believes it is important to only use ingredients that you can trust, from fruits and vegetables to herbs and mushrooms.

New Chapter supplements have been extensively tested and validated by scientific experts. All New Chapter multivitamins are fermented with whole foods and probiotics: bacteria beneficial to your health. Following a unique two-step method, the brand brings more vitality to its vitamins, minerals and herbs. At the same time, this makes New Chapter supplements easier to digest. New Chapter's fermented multivitamins are suitable for use at any time of day, even on an empty stomach. As a bonus, enjoy a nutrient-filled fermentate with many beneficial properties, including cholesterol-lowering beta glucans.

Take 1 capsule daily with food or as recommended by a healthcare practitioner. Not recommended for use in children.

Diet
Vegetarian
Instructions
Storage: see label. Keep out of the reach of children. Consult an expert before use in case of pregnancy, breastfeeding, illness or medication.
Write Your Own Review