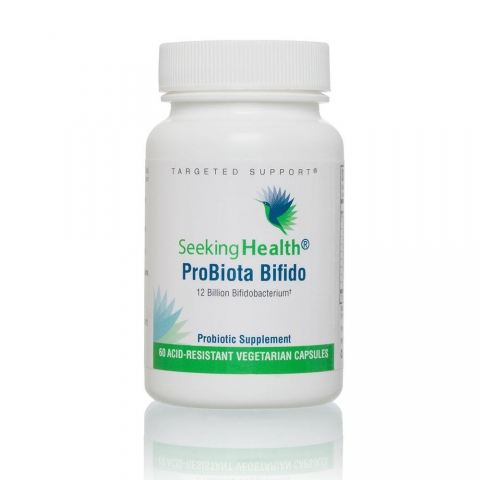 Seeking Health’s ProBiota Bifido is composed of seven extensively researched Bifidobacterium strains that are mainly found in the intestinal mucous membrane at the end of the small intestine, in the colon and in the genitourinary tract. ProBiota Bifido is encapsulated in acid-resistant, release-delaying vegetable capsules for optimal delivery of the bacterial strands in the colon. In addition, the formula is suitable for vegetarians and vegans, free from common allergens and of prebiotics, which is beneficial for anyone sensitive to starch or certain fibers. Because these probiotics consist only of Bifidobacterium strands, the product is suitable for anyone who prefers not to use Lactobacillus strains because of the possible histamine-producing activity of these strains.

Histamine and our intestines

Histamine is a biogenic amine that occurs naturally in both plant and animal products . The substance can also be produced by bacteria and occurs in low amounts in our body, where it has a function in, among other areas, the immune system, the gastrointestinal tract and the stimulus transfer in the brain. Once formed, it can be stored in mast cells or white blood cells and is released in certain immune responses, such as in the case of allergies, inflammation and/or drug use. In some cases the breakdown and exposure to histamine is unbalanced, including when there is a histamine intolerance, when the body makes too much histamine itself, or when too much histamine-rich food is consumed. Seeking Health’s ProBiota Bifido is rightly called a histamine-friendly probiotic, as it contains only bacterial strains known to not increase histamine levels in the gastrointestinal tract.

† At the time of manufacturing.