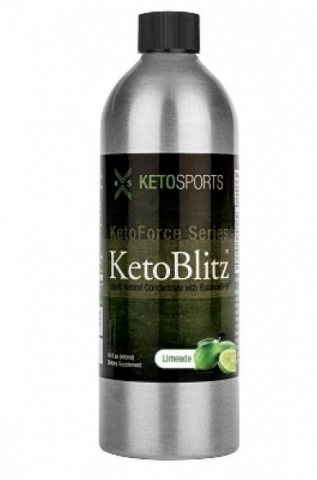 While many people rave about using exogenous ketones, the minerals these supplements contain are a drawback for some people. For this reason, KetoSports has developed the product KetoBlitz. This liquid ketone supplement contains BalanceBHB®, a source of beta-hydroxybutyrate with less sodium. This keto- friendly supplement is often used by people on a ketogenic diet. This type of diet aims to reduce the amount of carbohydrates in the body, so that the body starts to burn fat instead of glucose obtained from carbohydrates. KetoBlitz is also suitable for endurance athletes with intensive training regimes, especially athletes following a ketogenic diet.

The revolutionary formula of KetoBlitz

Keto Blitz was specially developed by KetoSports for users who want to monitor their sodium intake. KetoBlitz contains a revolutionary new source of beta-hydroxybutyrate (BHB) named BalanceBHB® (patent pending). It is a BHB, free acid and salt blend that results in 30% less sodium, more BHB per dose, and improved flavor due to the reduction of salts and the addition of a natural lime flavor. The blend also contains potassium, which benefits the functioning of muscles, blood pressure levels and the nervous system, as it contributes to the stimulus transfer between (nerve) cells.

This ketone supplement is suitable for paleo and ketogenic diet users, is free of lactose, gluten and artificial colors and flavors, and contains no animal ingredients. Before use, mix a dose of 30 ml with at least 240 ml of water, taken preferably 15 minutes before physical or mental exertion. KetoBlitz can be used in a maximum of three servings per day and should be kept refrigerated.

Ketones are produced in the liver when there is no longer any glucose in the body as fuel source. In such a case, the body switches to 'fat burning' instead of 'sugar burning': the liver breaks down body fat into fatty acids and glycerol, which are then further converted into ketones and glucose, respectively. This happens, for example, when you follow a strict low-carbohydrate or ketogenic diet, are fasting or have no food available or when you are performing a long-term, heavy physical performance. When your body switches to fats as the primary fuel, you enter a state of 'ketosis', a well-known phenomenon for those who know or follow the ketogenic diet. Did you know that it is also seen in babies when they are born? Ketosis is also the state our early ancestors generally found themselves in. After all, they naturally lived more on fats and proteins than on carbohydrates and had longer periods without food.

The fact that ketones on balance provide more energy than carbohydrates, fats or proteins has aroused the interest of many researchers. It has led to the development of products with ketones so that now, in addition to fasting and dieting, a state of ketosis can be achieved by taking ketones. The body can use ketones when its glycogen stock is exhausted, or to save the glycogen stock for later, as in the case of top sport. External ketones, in contrast to the 'endogenous' ketones produced by the body, are called 'exogenous ' ketones. Particularly because exogenous ketones are popular with top athletes, they are becoming more and more known and there is more and more pioneering going on in this field.

Exogenous supplements are available in the form of liquid esters or in the form of powders, also called ketone salts. Ketone salts are made from beta-hydroxybutyrate (BBB) bound to a mineral. The esters consist of beta-hydroxybutyrate (BHB), acetoacetate (AcAc), or a combination of both. Although esters are generally more concentrated, the downside is it that they are often more expensive and have a very sour or bitter taste. Most people who choose ketone supplements choose BHB powders. In these powders, beta-hydroxybutyrate (BHB) ketone bodies are always bound to a mineral such as sodium, potassium, calcium or magnesium, so that the powder can be taken orally. Exogenous ketones are frequently used by people following ketogenic or other health diets and by athletes aiming to get into a state of ketosis (quickly) and so burn ketones as primary fuel.

* Potassium, to which BHB is bound in this supplement, is good for the nervous system and blood pressure