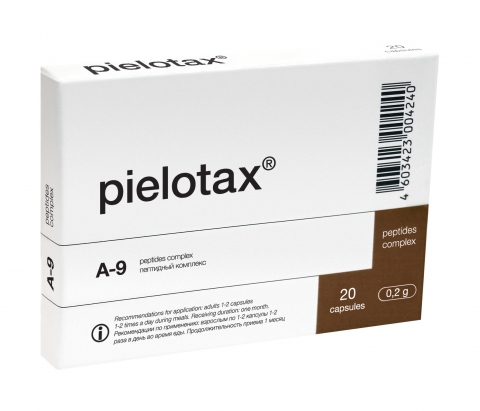 Pielotax - Kidney Extract
Skip to the beginning of the images gallery

Garmonia’s Pielotax® Kidney extract contains a peptide complex specifically to benefit the kidneys. Peptides occur naturally in every cell of our body. They are molecules made up of two or more amino acid compounds. The peptides in Pielotax® kidney extract are extracted from kidneys of Danish pigs and cattle kept in an environmentally friendly manner. As all products from the advanced peptide bioregulator line, Pielotax® is physiological active and very potent.

Pielotax® is very safe to use. Garmonia products are used by over 15 million people worldwide. There are no known side effects or contraindications. The product has been extensively tested for microbiology, heavy metals and other toxic elements. Pielotax® is suitable for adults 18 years and over. Various products from the peptide bioregulator line can be used simultaneously.

Pielotax® can be taken in two ways. For general use, we recommend taking one pack of the product every 6 months. This equates to 2 capsules per day for 10 consecutive days. For specific indications, we recommend using three packs of the product in a row. Because the product affects each individual user differently, it is possible to shorten or extend the period of use at your own discretion.

The precise effect of peptides was unraveled in the 1980s by Russian professor Vladimir Khavinson during a study for the Soviet Union. The results of his research were kept secret for over twenty years. Khavison discovered, among other things, that an interaction takes place between peptides and our DNA. Khavinson is president of the European Academy of Gerontology and Geriatrics (IAGG) and advisor to several Ministries of Health and honorary member of several universities. Khavinson is also a frequent speaker at anti-aging conventions, where he discusses his discoveries.

More Information
Product Name
Pielotax - Kidney Extract
SKU
GR-217-config
Brand
Garmonia
Content
20 of 60 capsules
User Instructions
For general use, in the absence of specific indications, take 2 capsules per day for 10 days (one package). Repeat once every 6 months. Where demand exists or in case of specific indications, use may be intensified. The same protocol may be repeated once a month or once every 2 or 3 months. Several products from the Peptide Bioregulator product may be used simultaneously. Caution: Do not use during pregnancy or breastfeeding. Always consult your doctor in case of a medical indication.
Ingredients per Serving
20 mg peptide-rich kidney extract from calves or pigs younger than 12 months †. † Recommended Daily Amount not established.
EU Norm
*RDA = Recommended Daily Allowance
Other Ingredients
Microcrystalline cellulose (E460), beet sugar, lactose, starch, twin-80.
Allergens
Lactose
Instructions
Storage: see label. Keep out of the reach of children. Consult an expert before use in case of pregnancy, breastfeeding, illness or medication.
Write Your Own Review