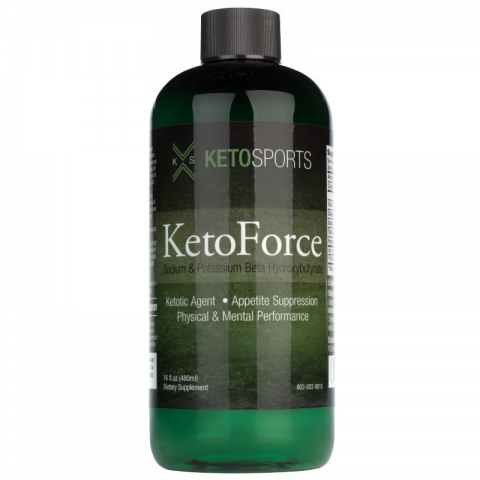 KetoForce is KetoSports’ original ketone salt supplement. It is a source of the exogenous ketone body beta-hydroxybutyrate (BHB) bound to the minerals sodium and potassium. This keto-friendly supplement is often used by people on a ketogenic diet. This diet aims to reduce the amount of carbohydrates in the body, so that the body starts to burn fat instead of glucose as obtained from carbohydrates. KetoForce is also suitable for intensive endurance athletes, especially for athletes following a ketogenic diet.

KetoForce is a renowned, unsweetened and unflavoured keto diet supplement in liquid form that contains no carbohydrates. Due to the binding of BHB with the minerals potassium and sodium, the supplement has a moisturizing effect. Not unimportant, since the ketogenic diet is a slightly diuretic diet. Potassium also benefits the functioning of muscles and blood pressure, and is important for the nervous system, as it contributes to the stimulus transfer between (nerve) cells. KetoForce can be taken three times a day during the first phase of a ketogenic diet, when the body is entering a state of ketosis. Once the body has reached a state of ketosis, its use can be reduced to once daily. Because KetoForce has an alkaline pH value of 10-11, the drink does not taste particularly pleasant. However, when the liquid is mixed with an acidic drink, such as lemonade or grapefruit juice, you can easily and quickly create a delicious keto lemonade!

Chemically, ketones are water-soluble molecules produced in the liver when there is no glucose for the body to use. With a power supply pattern consisting mainly of carbohydrates and less from proteins and fats, the body turns carbohydrates into glucose as a fuel for the body. However, when little glucose obtains within the body, for example in times of food scarcity, you eat few carbs, or heavy physical exertion for a a prolonged time, your body goes on to fat burning to prolong energy deliverance. The liver breaks fats down into fatty acids and glycerol, which can be converted into ketones and glucose, respectively. This will eventually lead to a state of 'ketosis', a well-known phenomenon for those who have ever followed a ketogenic diet. Did you know that as a newborn, you are in a state of ketosis? This is also the state in which the bodies of our early ancestors often resided. After all, it is only since the advent of the modern food industry that the body got its semi-permanent higher intake of carbohydrates and went on to use mainly carbohydrates and glucose as its primary fuel sources.

The process of ketogenesis is actually a survival mechanism of the body to maintain optimal brain function at all times, even when carbohydrates are not available as an energy source. When your body switches to a ketogenic metabolism, ketones are first made from stored body fat in the liver, which gets broken down into fatty acids and glycerol molecules. Fatty acids and glycerol are excellent fuel for most cells in the body, but they cannot cross the blood-brain barrier. That is why the body breaks further down the fatty acids into ketones, which can cross this barrier. Switching over to a ketogenic metabolism is an impressive ability of the body to adapt to food as available. The mechanism ensures that in times of scarcity the body first uses its fat reserves, instead of, say, digesting valuable muscle tissue, and ensures that the brain is assured of sufficient energy. Without this capability, our ancestors probably would not have survived periods of food shortage.

In recent years, there is more and more research carried out into ketones, in particular because of their promising image as an efficient energy source for the body. Studies have led to the ability to produce ketones outside the body. These are external or “exogenous” ketones, in contrast to the body’s self-produced "endogenous" ketones. In addition to fasting or dieting, a state of ketosis can now also be achieved by taking ketones. For example, the body can use ketones when the glycogen stock is depleted or, in case of top sport, to hold on to the glycogen stock until a later moment. Exogenous ketones are popular with top athletes, which has resulted in the products having become increasingly well-known to the general public and more and more pioneering research being done in this area.

A distinction can be made between two types of exogenous ketone supplements, namely, supplements in the form of liquid esters and those in the form of powders, also called ketone salts. The latter are made from mineral-bound beta-hydroxybutyrate (BHB), while esters consist of unbound beta-hydroxybutyrate (BHB), acetoacetate (AcAc) or a combination of both. Esters are generally more concentrated, but this also renders them more pricey and they also have a very sour or bitter taste. BHB powders are usually favored by those following ketogenic and other health diets and are particularly popular with athletes, who choose the esters with the aim to rapidly get into a state of ketosis. To facilitate oral intake, in these powders the keto body is always bound to a mineral such as sodium, potassium, calcium or magnesium.

KetoSports is a true pioneer in the field of exogenous ketone supplements. Various KetoSports products such as KetoCaNa, KetoBlitz and KetoForce are well known - and the company keeps evolving and innovating. KetoSports is the brainchild of American organic chemist Patrick Arnold, known as the 'father of the prohormone' owing to his earlier work. In 2010 Arnold was asked by the University of Florida to synthesize beta- hydroxybutyrate (BHB) so that it could be used for research purposes. When Arnold saw the results of the experiments conducted by the university, he became enthusiastic. He envisioned new applications and began to research the substance himself. He soon achieved results with a product consisting of a compound of BHB with sodium and calcium. Over the ensuing years, KetoSports has developed into a high-quality supplement company with unique products for anyone looking for quality exogenous ketone supplements.

* Potassium, to which BHB is bound in this supplement, benefits the nervous system and blood pressure

More Information
Product Name
KetoForce - Exogenous ketone body beta-hydroxybutyrate (BHB)
SKU
KF-01
Brand
Ketosports
Content
480 ml
User Instructions
It is suggested that this product be consumed during the initial stages of a ketogenic diet (three times a day for first 2-3 days) to accelerate ketosis and ease metabolic transition. It can be consumed once a day once ketosis has been achieved for help with ketosis maintenance. The product may also be consumed prior to high intensity aerobic exercise to enhance performance, especially for those on a low carb/ketogenic diet.
Ingredients per Serving

EU Norm
*RDA = Recommended Daily Allowance
Other Ingredients
water, citric acid, sodium hydroxide.
Allergens
None
Instructions
Storage: see label. Keep out of the reach of children. Consult an expert before use in case of pregnancy, breastfeeding, illness or medication.
Write Your Own Review