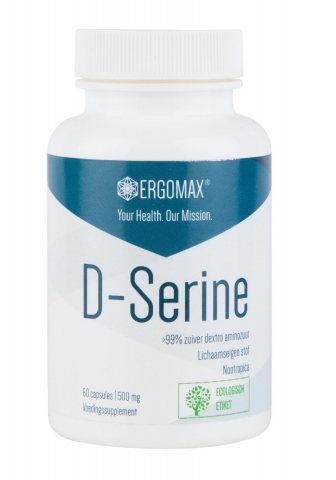 Ergomax D-serine contains more than 99% pure dextro serine. D-serine is a naturally occurring dextro amino acid. D-serine is a body's own substance that is common in the brain: it is produced within the human body. It is a unique nootropic. Athletes, students, professionals and people doing high-skilled tasks often opt for a D-serine supplement.

D-Serine is the second amino acid to have been discovered after D-aspartate. D-Serine is a proteinogenic amino acid and is also known simply as serine. Most amino acids come in two enantiomers (mirror-image molecules), in an L- (laevo = left) and in a D-structure (dextro = right). Usually the two structural variants have different effects in the body. D-serine offers the specific features of the D-form.

Parallels with the effects of glycine

D-serine is comparable in function to glycine. A glycinergic substance is a substance that modulates the body’s glycine system. D-serine is a so-called ligand, a molecule that can bind another molecule. D-serine can bind to the glycine binding site at NMDA receptors and is a so-called glio-transmitter. The effect of D-serine appears to be more biologically relevant, and generally more potent, than that of glycine.

The building blocks of the body

Use of D-serine has been documented at a dose of 2,000 mg total per day for up to six weeks. No adverse effects occurred.

At Ergomax we believe that everyone should be able to pursue optimal health. We help by offering natural food supplements in combination with professional guidance. We spend a lot of time and care on research into new and unique compounds and products with proven effects. All to meet the high expectations of our customers. All products from the Ergomax product line have been carefully selected and tested. Products and raw materials are as natural as they come. Mother Nature always knows better, we like to say.

Take 3 capsules twice a day with a meal or as recommended by a healthcare practitioner.