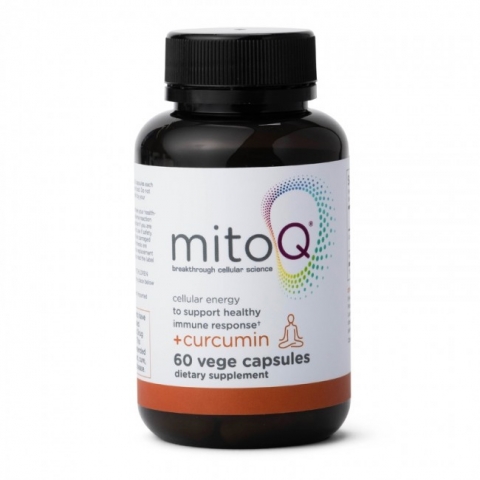 MitoQ - Curcumine
Skip to the beginning of the images gallery

MitoQ is a revolutionary CoQ10 supplement with the patented Mitoquinol Mesylate as the main ingredient. Mitoquinol Mesylate was developed by MitoQ® based on years of research and is a shortened and positively charged version of coenzyme Q10. In this product the compound is combined with the patented turmeric extract Longvida® Curcumin. Turmeric supports the immune system*, has an antioxidant effect* and benefits the heart*, blood vessels*, digestion* and liver*. A true powerhouse for your health!

MitoQ® - Longvida® Curcumin is the only product in the world combining the third generation of CoQ10 with the patented Longvida® Curcumin. Unique about this turmeric supplement is that it uses the Solid Lipid Curcumin Particle Technology (SLCP™), or phospholipid method, to improve curcumin absorption. Using this technique, curcumin is coated with tiny fat-soluble spheres made from natural phospholipids. The curcumin is protected by the phospholipids against breakdown and eventually taken into the bloodstream; this method ensures a 95 times higher absorption of curcumin. In addition, this method has been found to be completely safe.

Turmeric and your health

Curcuma longa (turmeric Asian Turmeric) is a botanical relative of ginger known as a beneficial plant across many traditions old and new. Turmeric sustains the immune system*, acts as an antioxidant* and benefits the liver* as well as digestion*. It also benefits heart, blood vessels and circulation*, skin*, the nervous system,* and healthy airways *. In all a true pleiotropic herb, with multiple physiological effects throughout the body.

Take two capsules in the morning.