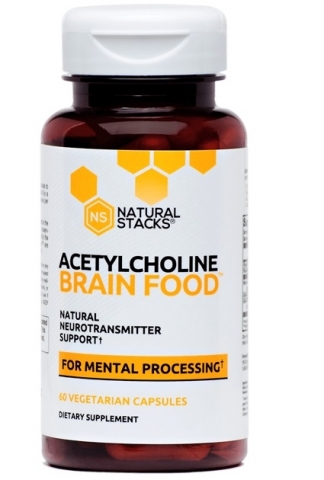 Acetylcholine Brain Food™
Skip to the beginning of the images gallery

Natural Stacks' patented Acetylcholine 'brain food formula' consists of a combination of ingredients that together provide the essential precursors and cofactors for the production of the neurotransmitter acetylcholine. Acetylcholine is a neurotransmitter that plays a role in attention, learning and a clear mind. It is also referred to as the 'learning molecule'. Acetylcholine Brain Food™ contains the nutrients alpha-GPC, vitamins B1 and B5, the Chinese plant Radix Paeoniae albae, or White Peony extract, and the amino acid acetyl-L-carnitine.

Neurochemistry pertains to the whole of biochemical processes in the brain. Neurotransmitters play an important role in neurochemistry as signaling molecules. This extremely complex interplay varies from person to person, but also from season to season. Genetic as well as epigenetic factors (such as the environment, nutrition, sleep and exercise) can influence this. A 'brain food supplement' contains natural substances and precursors of specific neurotransmitters.

How Is Acetylcholine Made?

To synthesize acetylcholine, the brain requires two elements: an acetyl group and a choline molecule. Acetyl groups are usually present in the brain in the form of Acetyl-CoA. Choline and the acetyl group are joined by the enzyme Choline Acetyltransferase (ChAT). Both are first stored in neurons, then released and broken down by another enzyme called acetylcholinesterase (AchE). It is therefore important that sufficient acetyl-CoA and choline molecules are available, that the ChAT enzyme shows good activity, and that the AchE enzyme does not have too high an activity.

Vitamin B1, in the form of Thiamine HCI, is a multi-health vitamin for the brain, the larger nervous system, psychological functioning and heart. Vitamin B1 plays a role in the production of acetyl-CoA molecules in the brain. Acetyl-CoA molecules can donate acetyl groups to the enzyme Choline Acetyltransferase (ChAT) so that it can produce the neurotransmitter acetylcholine.

Pantethine, or the patented formula Pantesin®, is a powerful form of vitamin B5 that plays the same role as vitamin B1 in generating the acetyl-CoA molecules used by ChAT in the production of acetylcholine. Vitamin B5 also enjoys various health claims pertaining to the brain, energy metabolism, stress reduction and the metabolism and synthesis of neurotransmitters.

The extract of Radix Paeoniae albae is the Latin name for the extract of the Chinese herb Bai Shao Yao, or White Peony. White peony extract plays a role in the activity of the ChAT enzyme, which is involved in the synthesis of acetylcholine.

Acetyl-L-Carnitine, or ALCAR, is an acetylated form of the amino acid L-Carnitine

known for its ability to move well throughout the body. It plays a role in energy metabolism, in mitochondrial function and in acetylcholine synthesis.

L-alpha-glycerylphosphorylcholine, or GPC-α or choline Alfoscerate, is a metabolite of the phospholipid phosphatidylcholine. It is a precursor to the neurotransmitter acetylcholine. Alpha-GPC is classified by the FDA as Generally Recognized As Safe.

Being able to think and recall clearly and to learn new things are vitally important in life. Natural Stacks has been developing safe and natural supplements specifically for optimal brain functioning since 2013. These so-called nootropics target key areas such as energy, sleep, focus, memory and mood. Natural Stacks uses pure natural ingredients and is completely transparent about the content on each label. Every batch of Natural Stacks products is tested and verified by independent laboratory Intertek for purity, potency and quality. Natural Stacks' mission is powerful: Better Brain. Better Life.®

Take a serving of 2-4 capsules to support mental processing speed, or as directed by a healthcare practitioner. Do not exceed 8 capsules per day.