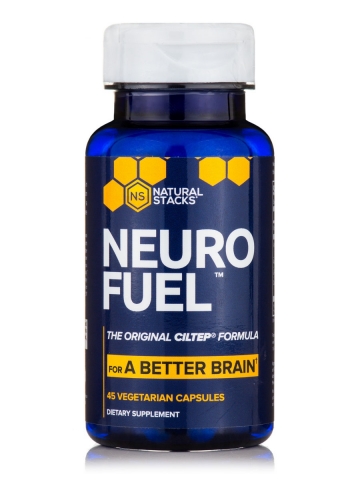 Neurofuel™ - Ciltep - Nootropics
Skip to the beginning of the images gallery

The patented product Neurofuel™ contains the original CILTEP® formula and contributes to more focus, elevated concentration and mental energy, and a good memory. This natural nootropic contains B6, artichoke extract, forskolin, L-phenylalanine and acetyl-L-carnitine. This specific brain formula has a natural and groundbreaking synergistic effect: it is a true 'mind opener'.

Fuel for your brain

When is Neurofuel™ suitable? We all know situations when we need more focus, want to concentrate more fully, or think more clearly. Sometimes we have complex problems to solve or important goals to achieve. Some people also suffer from what is known as brain fog or simply a lack of motivation. As we get older, this can happen more and more often. We can all use a little push from time to time. Neurofuel™ is a 100% natural formula for better brain performance.

How does it work?

Take two capsules of Neurofuel™ on an empty stomach, for example before work or a situation requiring focus. Thirty minutes later you can feel the fuel going to work. Neurofuel™ provides the body with the natural ingredients it needs in the moment. CILTEP® is widely popular with business people, students, athletes, scientists and creative minds, among others. In addition to the immediate tangible effects, it also has long-term effects. In general, users experience effects shortly after ingestion but they can last for 8 to 14 hours.

The long-term action of Neurofuel™ is known as Long-Term Potentiation, or LPT. LPT is a long-term enhancement of signal transmission between two neurons in the brain. It is one of the most important cellular mechanisms behind learning and memory. The ingredients in this formula work in close unison. They inhibit a substance called PDE4. PDE4 blocks the breakdown of a substance called cAMP, thus increasing cAMP content in brain cells. This process results in LPT and produces significant nootropic effects. It also renders dopamine metabolism more effective.

Neurofuel™, or the original CILTEP® formula, contains 5 ingredients that reinforce each other and work together in a natural way.

Neurofuel™ contains vitamin B6 in the form of pyridoxal-5-phosphate, or P5P. P5P is the biologically active form of Vitamin B6. The vitamin no longer needs to be converted by the body, a process not equally efficient for everyone. The body can therefore use it immediately. Vitamin B6 is an essential vitamin and an important enzymatic cofactor for normal metabolic and psychological functioning. In the brain Vitamin B6 is used as a cofactor in the production of neurotransmitters dopamine, GABA and serotonin. Vitamin B6, for example, helps convert the precursor L-DOPA into active dopamine.

The second ingredient of Neurofuel™ is artichoke extract. Artichoke extract (Cynara scolymus) is an extract from the artichoke vegetable bulb. It enjoys several health claims still awaiting approval by the European Commission. It also contains luteolin, which plays a role in the enzyme PDE4 as well as LPT.

The third ingredient of Neurofuel™ is forskolin extract from the beneficial plant Coleus Forskohlii. This is a naturally rich source of the substance forskolin, which shows a unique biological activity. Forskolin helps activate certain enzymes and plays a role in the metabolism of cAMP molecules and LPT. Forskolin is widely used in Ayurveda.

Acetyl-L-Carnitine, or ALCAR, is an acetylated form of the amino acid L-Carnitine known to move well throughout the body. It plays a role in energy metabolism and mitochondrial function. In addition to the CILTEP formula, it show a synergistic effect with the other ingredients.

Do not combine CILTEP® with other stimulants, as CILTEP® can enhance their effect. CILTEP® may be combined with the product Smart Caffeine from Natural Stacks. Depending on the tolerance, 100-200 mg of caffeine offer optimal results. Do not use this product if you have PKU (Phenylketonuria) disease.

Better Brain. Better Life.® The mission of a company could not be clearer. Since 2013, Natural Stacks has been offering a superior line of supplements specifically aimed at the proper functioning of the brain. Nootropics, as these products are also called, target areas ranging from energy, sleep, focus, and memory to mood. Natural Stacks uses only the best natural ingredients in its products. Composition and origin are completely open source, and ingredients are verbosely spelled out on the label. All products are tested by independent laboratory Intertek for quality, purity and potency.

Take 2-3 capsules immediately after waking up on an empty stomach. Do not take more than 3 capsules per day. CILTEP® can be used daily. However, the manufacturer recommends a break of 1-2 days per week to prevent habituation.

Caution: the effects of CILTEP® are enhanced by caffeine, this product contains L-Phenylalanine, do not use in case of phenylketonuria (PKU), do not use together with nicotine and/or prescribed stimulants, not suitable for children under the age of 18, do not use during pregnancy or breastfeeding and consult your healthcare professional in case of a concurrent medical condition, suspicion thereof, or use of medication.