By: Prototype Nutrition
Be the first to review this product
Skip to the end of the images gallery 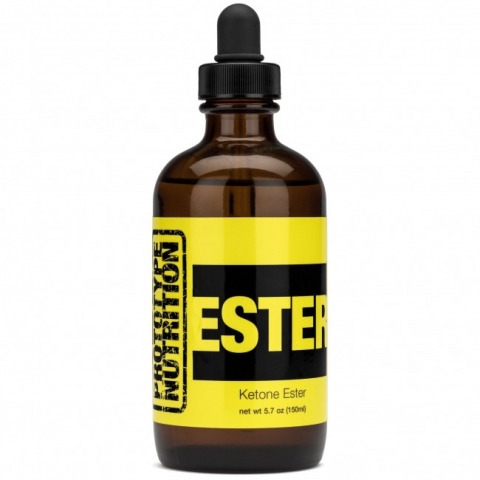 Prototype Nutrition’s Ketone Ester is a pure formulation without salt with no less than 1 gram of ketones per milliliter. The supplement consists of a concentrate of R,S Butanediol Diacetoacetate Ester (AcAc Ketone Ester) and has been specifically developed for endurance athletes, by organic chemist Patrick Arnold. The supplement is not diluted in any way and it is therefore important to slowly build up the dosage. Start by mixing 1 ml of Ketone Ester in approximately 50 ml of liquid and slowly increase the dose until you reach a maximum of 10 ml per dose.

Exogenous supplements are available in the form of liquid esters or in the form of powders, also known as ketone salts. Ketone salts are made from beta-hydroxybutyrate (BHB) bound to a mineral. The liquid esters consist of BHB, acetoacetate (AcAc) or a combination of both, and are the most potent. They exist in a mono-ester, di-ester or tri-ester form and are linked via an ester link to butanediol or glycerol. Although esters are more concentrated, their disadvantage is that they are often more expensive and have a rather sour or bitter taste. Exogenous ketones are often used by people following a ketogenic diet or other health diet and by elite athletes with an aim of increasing the number of ketones in the blood, so that one gets into a state of ketosis and starts to burn ketones as primary fuel (more rapidly).

The fact that ketones on balance provide more energy than carbohydrates, fats or proteins has aroused the interest of many researchers. It has led to the development of products with ketones so that now, in addition to fasting and dieting, a state of ketosis can be achieved by taking ketones. The body can use ketones when its glycogen stock is exhausted, or to save the glycogen stock for later, as in the case of top sport. External ketones, in contrast to the 'endogenous' ketones produced by the body, are called 'exogenous ' ketones. Particularly because exogenous ketones are popular with top athletes, they are becoming more and more known and there is more and more pioneering going on in this field.

Exogenous supplements are available in the form of liquid esters or in the form of powders, also called ketone salts. Ketone salts are made from beta-hydroxybutyrate (BBB) bound to a mineral. The esters consist of beta-hydroxybutyrate (BHB), acetoacetate (AcAc), or a combination of both. Although esters are generally more concentrated, the downside is it that they are often more expensive and have a very sour or bitter taste. Most people who choose ketone supplements choose BHB powders. In these powders, beta-hydroxybutyrate (BHB) ketone bodies are always bound to a mineral such as sodium, potassium, calcium or magnesium, so that the powder can be taken orally. Exogenous ketones are frequently used by people following ketogenic or other health diets and by athletes aiming to get into a state of ketosis (quickly) and so burn ketones as primary fuel.

In 2010 American organic chemist Patrick Arnold - known as "father of prohormones" owing to his previous discoveries - was awarded an application from the University of Florida to chemically produce beta- hydroxybutyrate (BHB) for research purposes. Once the chemist succeeded, very interesting experiments could be done with the substance. Patrick Arnold was also impressed by the experiments and suddenly saw new possibilities for the use of this substance. He set to work and the result of his research process was a new product: a compound of BHB with sodium and calcium. In the years that followed, he developed a high-quality line of various products containing exogenous ketones in the form of BHB linked to minerals including KetoCaNa, KetoForce and KetoBlitz -- all under the name KetoSports.

To reduce the risk of an upset stomach, start with an amount of 1 milliliter mixed in 100-150 ml of a liquid of your choice.

Gradually increase the dose until you reach 10 ml.

Always consult a healthcare practitioner before starting a new supplement.

EU Norm
*RDA = Recommended Daily Allowance
Instructions
Storage: see label. Keep out of the reach of children. Consult an expert before use in case of pregnancy, breastfeeding, illness or medication.
Write Your Own Review