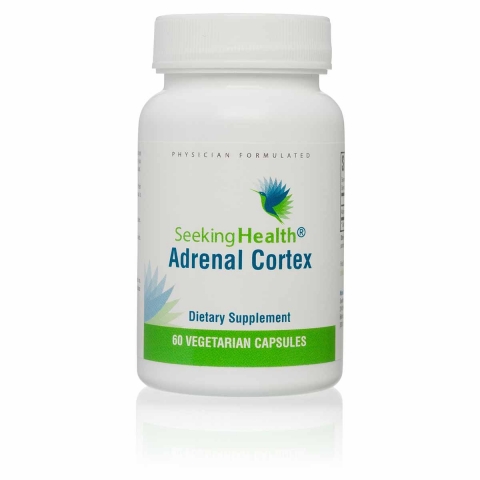 For time immemorial our ancestors ate according to the head-to-tail principle, being convinced that eating healthy, animal organs would have a nurturing effect on the same organs in the human body. Organ supplements, such as Seeking Health's Adrenal Cortex, are formulated in accordance with this belief. Adrenal Cortex delivers 50 mg of bovine adrenal cortex per capsule, freeze-dried using standardized procedures to preserve biological activity. The supplement is a source of adrenal-specific enzymes, peptides and cofactors and is made from bovine adrenal extract sourced from grass-fed cattle from Argentina.

About our adrenal glands

The adrenal glands are small organs located above the kidneys that make the important hormones cortisol, aldosterone, adrenaline, norepinephrine and the sex hormones. Anatomically they consist of two components: the cortex (the outside) and the medulla (the inside, marrow part), both of which produce chemicals specific to our body. In fact, the adrenal glands' main function is to deal with difficult, stressful situations, playing a role in responses known as the "fight or flight" responses. While these responses can be life-saving in certain situations, exposure to chronic stress is stressful for this response system and thus to our adrenal glands. Seeking Health's Adrenal Cortex consists of 50 mg of pure bovine adrenal extract per capsule. The product is free of the most common allergens and artificial colors and flavors and has been formulated with the greatest possible care.

Epigenetics refers to the myriad factors that influence our gene expression. The name epigenetics was coined in 1942 by biologist Conrad Waddington and literally means 'around the DNA', referring to the markers around the DNA that can turn genes on and off. The idea behind it is that the experiences, living conditions and nutrition of an organism have a major modulating influence on its genetic predisposition. For Dr. Ben Lynch, epigenetics stands for the power of our genes and for the fact that we are not our DNA, but that we can work with our genes and just need to know how to shape this cooperation. The Lynch method is therefore aimed at our DNA markers (also called SNPs or single nucleotide polymorphisms). By using supplements and making adjustments in diet and lifestyle, we can aim to 'clean up dirty genes', in Lynch's words.

From an early age, Dr. Ben Lynch, founder of Seeking Health, was interested in the relationship between health and gene expression, and studied natural medicine, molecular biology and epigenetics. In his recent book Dirty Genes, he describes how having 'contaminated' genes can be the cause of countless health problems and shows how you can optimize the functioning of your genes through the right diet and lifestyle. In recent years he helped thousands of clients, physicians and health care professionals in the use of these insights and therefore is currently one of the most consulted experts in the field of epigenetics.