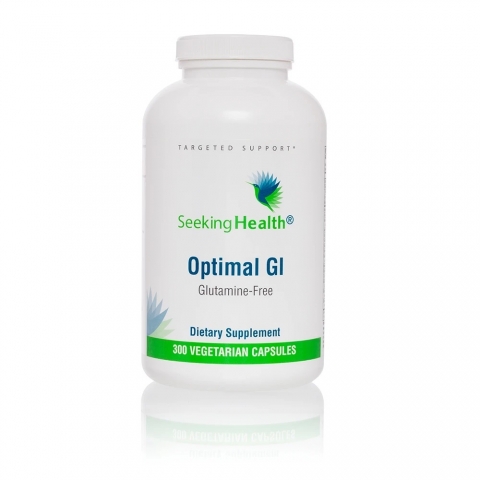 Seeking Health’s Optimal GI is specifically aimed at the body’s complex gastrointestinal tract. The supplement contains a targeted mix of important nutrients and herbs, including MSM®, N-acetyl-D-glucosamine, molybdenum, zinc, deglycyrrhized liquorice or extracts of cat's claw, turmeric, nettle, milk thistle, aloe vera and red elm. The formula is manufactured to suit easy-to-swallow capsules, which in contrast to the Seeking Health’s Optimal GI Powder Formula contains no L-glutamine, because not everyone can tolerate this equally well.

The intestines are coated with a mucous membrane which serves two vital functions: to absorb nutrients and water, and to separate out unnecessary substances classified as waste products to leave the body. The powerful blend of nutrients in this formula offers an unusual combination for your digestion. The gastrointestinal tract doesn't just need a healthy probiotic population to thrive. For example, the zinc added in this supplement plays a role in the building and breakdown of carbohydrates, fats, proteins and nucleic acids and supports normal metabolism as well as the immune system. Molybdenum contributes to normal sulfur amino acid metabolism; cat's claw and nettle support the immune system*3; and nettle provides energy*3 and benefits the urinary tract*3. Milk thistle supports the cleansing effect of the liver*3, has antioxidant properties*3 and supports the immune system*3. Quercetin and marshmallow belong to the flavonoids, which have antioxidant properties*3 and methylsulfonylmethane (MSM® ) may support our muscles and joints*3. Turmeric is also added to the blend, which, too, has an antioxidant effect*3 and supports the immune system*3 and benefits digestion*3.

Optimal GI capsules should be taken without food.

Take 5 capsules daily in divided doses without food, or as directed by your healthcare practitioner.