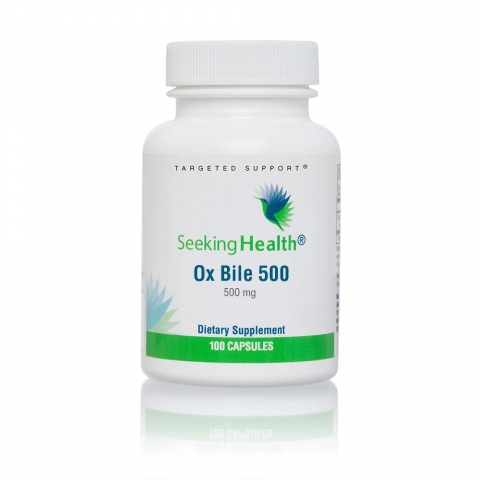 Seeking Health’s Ox Bile delivers 500 mg of ox bile per capsule and derives from healthy, grass-fed German cattle that have not been given synthetic hormones or antibiotics. The capsules are made from vegetarian cellulose, but the product itself is, of course, not vegetarian. The capsules are free of the most common allergens, such as fish, eggs, milk, soy and wheat. Each capsule is standardized to 40% cholic acid, one of the bile acids. Bile acids, including cholic acid and chenodeoxycholic acid, are important components of bile.

The liver and bile

Bile is a yellow-green fluid excreted by the liver and consists of water, bile salts, cholesterol and bilirubin, among other substances. Hydroxylation and oxidation of cholesterol in the liver produces the two most important bile acids, cholic acid and chenodeoxycholic acid. Bile acid salts are formed from these bile acids, which play a role in intestinal digestion. Bile salts have the task of dissolving fats, cholesterol and fat-soluble vitamins in the juices of the small intestine. They also take care of excretion of water through the wall of the colon, which helps to better digest intestinal contents. In addition, bile salts cause fats to be emulsified, so that micelles are formed and the fats are easier to digest. When the bile wears off, many bile salts are reabsorbed through the gut-liver cycle and transported back to the liver for reuse.

Take 1 capsule daily with a meal or as directed by your healthcare practitioner.