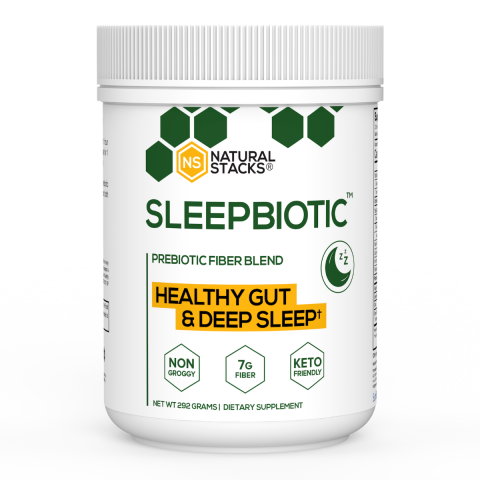 SLEEPBIOTIC™
Skip to the beginning of the images gallery

SleepBiotic™ contains a natural blend of indigestible prebiotic plant fibers, namely SunFiber® dietary fiber and green banana flour. The product also contains glycine, German chamomile standardized to 1% apigenin-7-glucoside, Ceylon cinnamon and monkfruit extract or the extract of the plant Luo han guo. Cinnamon and chamomile support digestion, among other things, and chamomile has a calming and relaxing effect. These claims are still pending approval by the European Commission. SleepBiotic™ complements a healthy diet and a healthy day and night rhythm. It is best used, as the name implies, at night before going to sleep.

Sunfiber® fibers are soluble dietary fiber from the guar plant. The guar plant grows in western India, among other places. Sunfiber® fibers are obtained by partial hydrolysis of the guar gum and are based on galactomannan. Sunfiber® fibers are 100% natural, are gentle on your digestion and are well tolerated. They also fit well in a low-FODMAP diet. The green banana flour is ground in the United States and is made from the pulp of unripe green bananas. These unripe bananas have a much lower sugar content than yellow bananas. Raw green banana flour is extremely nutritious: it contains a lot of potassium, vitamins, minerals and resistant starch.

The spice cinnamon comes from the cinnamon tree or Cinnamomum verum from Sri Lanka. Ceylon cinnamon is 100% natural. Glycine is a non-essential amino acid and functions, among other things, as a neurotransmitter. Also known as Matricaria recutita or Chamomilla recutita, German chamomile is standardized to 1% apigenin-7-glucoside (flavonoid), an important bioactive compound in this product.

For optimal effect, it is best to use SleepBiotic™ just before going to sleep. Build up usage slowly. For example, start the first week with half a measuring spoon and dissolve it in a glass of water. Build this up to 1 scoop in the second week. SleepBiotic™ is manufactured in the United States according to the quality standard 'Good Manufacturing Practice' (GMP guideline). Natural Stacks only uses very high quality ingredients. Only the best is good enough! SleepBiotic™ also fits well in a ketogenic diet.

Due to the chamomile ingredient, do not use SleepBiotic™ if you are pregnant or breastfeeding.

Natural Stacks' mission is simple: Better Brain. Better Life.® Clear thinking, a good memory and learning new things are important keys in life. From that vision, Natural Stacks has been offering safe and natural supplements since 2013 specifically for optimal brain function. These so-called nootropics target areas such as energy, sleep, focus, memory and mood. The company uses only the best natural ingredients in their products, which are completely open source in content. All ingredients are fully traceable in terms of origin and are shown exactly on the label. The quality of the products is tested by an independent laboratory.

For a great night of sleep mix with 4-6 oz water 1 hour before bed. Start by taking 1/2 scoop per day for 1 week then increase to 1 full scoop per day.

Ingredients per Serving
EU Norm
*RDA = Recommended Daily Allowance
Instructions
Storage: see label. Keep out of the reach of children. Consult an expert before use in case of pregnancy, breastfeeding, illness or medication.
Write Your Own Review