By: Taiga Professional
Be the first to review this product
Skip to the end of the images gallery 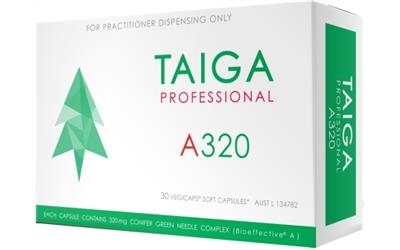 Taiga: the power of a Northern primeval forest in one capsule!

A Taiga capsule consists largely of, or is extremely rich in, so-called 'bio-effectives'. These are a series of pine needle extracts that have been examined for the past 75 years by Russian biotechnicians and scientists from the former Soviet Union for their bio-effectiveness. This mainly concerns the Scotch Pine (Pinus sylvestris), European Spruce (Picea Abies) and Siberian Fir (Abies sibirica). They appear to have powerful effects; also in the human body.

The scientists became fascinated by the ability of these pine species to thrive, remain disease-free and retain their rich green color at extreme temperatures and temperature changes: from -50 to +40 degrees Celsius. In addition, these trees have to do with seasons in which it can remain virtually dark for 24 hours and so there is hardly any photosynthesis.

The pine species studied are subject to extreme conditions due to their geographical habitat and they have developed properties - a biochemical balance - that has guaranteed their survival during 1.5 million years of evolution.

Although different parts of the pine tree can be used (see the pine pollen in our range), green needles have traditionally been the part to which most medical and alternative properties are attributed.

From a 4,600-year-old archive dealing with Traditional Chinese Medicine (TCM), medicinal formulas with pine needles as an active ingredient have been found. There is even a Taoist habit of surviving only on pine needles in order to obtain supernatural powers. In the health systems of various Indian tribes, the green needles were (and are) being used to treat all kinds of physical discomforts.

Scandinavians use the branches in their saunas, and other cultures fill mattresses with pine needles to ward off lice, fleas and other insects, for example.

Russian scientists Professor Fjodor Solodky and Dr. Asney Agranat observed pine trees in the 1930s because of their exceptional ability to remain green despite extreme weather conditions. Both worked at the Forest Technical Academy of St. Petersburg.

They discovered certain substances in pine needles that are probably responsible for the exceptional qualities of the pine trees: polyprenols. The polyprenols have an important function as a natural bioregulator in the trees and are found in small quantities in different plant tissues; however, they are found on a large scale in needles from the green pine. Dolichols (a derivative of these polyprenols) are found in all living things, including humans. In the liver, polyprenol is converted to dolichol. From there, dolichol performs numerous functions in biochemical processes.

Take one capsule twice a day before a meal or as advised by a healthcare professional.