By:
Be the first to review this product
Skip to the end of the images gallery 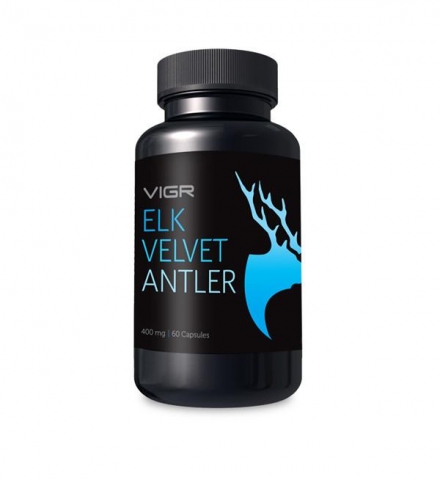 VIGR Lifestyles Each Velvet Antler is a very powerful natural supplement that has enjoyed popularity from traditional Chinese medicine for centuries. Every spring the antlers of the deer, or moose, are collected on specially selected farms. This is completely pain-free for the animals and the antlers grow back. The Roman author and naturalist Pliny the Elder described the young 'velvet antler' in the first century as "the right horn is what that contains something of a healing medicine".

Each capsule contains: 400 mg 100% pure, concentrated and standardized moose-velvet antler (Elk Velvet Antler). Take one to two capsules each morning, or as recommended by a doctor or therapist. For best results; double the dose in the first three weeks or until clear improvement occurs. Use the product daily for long-term benefits.

Only the “Western Canadian Elk” with a monitored health history of the entire herd deliver antlers for this product. The moose are kept by professional farmers who have been specially trained by veterinarians to 'harvest' the antlers. Moose farms that harvest VIGR ensure that their animals can graze freely, are free from hormones and medicines and are cared for in an animal-friendly manner. All products are traceable up to and including the farm and the herd where they come from. In addition, every product is processed in a GMP-certified lab.

VIGR guarantees that the capsules consist of 100% Elk Velvet Antler and contain no other exipients or fillers; unless otherwise stated on the label. VIGR Each Velvet Antler contains more active ingredients than all other antler products on the market. Canadian antlers are valued all over the world for their effectiveness and, moreover, are 'grown' in a climate with harsh winters, giving them their special character.

Velvet Antler is known as a very powerful tool in Traditional Chinese medicine. It is currently one of the most prescribed animal ingredients in the traditional Eastern medical system. The use of antlers is believed to date from the Han Dynasty in China (206 BC to 220 AD). It symbolizes the heat and 'warm qualities'; the energy that the animal channels and uses to grow the antlers. The place where all vital energy flows.
Strict supervision of the domestic Canadian moose population combined with a GMP-certified production process ensures one of the most sustainable, safest and high-quality supplements available on the natural health market.
Ergomax has added this product to the product range to cater to those interested in Traditional Chinese Medicine (TCM). The overall picture of man is central here, as opposed to only the disease: the pure anatomical facts. Whereas Western medicine is (still) strictly dealing with ailments, TCG looks at the overall balance of the system: an energetic image in the moment.