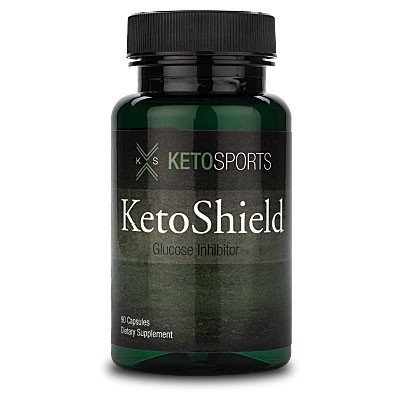 KetoSports KetoShield
Skip to the beginning of the images gallery

KetoSports specializes in supplements that are part of a ketogenic diet and that aim to help the body to (more rapidly) enter a state of ketosis. The ketogenic diet is particularly popular with people who aim to lose weight, people who -- for medical reasons, for example -- want to limit their carbohydrate intake, and with elite athletes who want to derive their energy from 'fat burning' instead of 'sugar burning'. KetoShield contains the antioxidant flordizine*2 and has an effect on the impact carbohydrates have on the body*3. KetoShield is best taken three times a day with the main meals.

When your body takes in carbohydrates, they are broken down by the digestive system into glucose. When there is a lot of glucose in the blood, the insulin level spikes and excess energy is stored in the form of body fat. KetoShield has been developed especially with regard to blood sugar levels. When glucose levels in the blood are normal and insulin levels do not rise much, this has a beneficial effect on fat burning. This supplement consists of 200 mg capsules that help balance the impact of carbohydrates on the body*3.. The active substance in KetoShield is the antioxidant floridzine*2, a substance that belongs to a subgroup of the flavonoids and that occurs naturally in apples, among other foods. Always consult a doctor before using this supplement, especially in case of kidney disease or prescription medication.

When the body mainly consumes carbohydrates and less fats and proteins, the body uses carbohydrates converted into glucose as fuel for energy. However, if there is little glucose in the body, for example in the case of food shortages, when you are engaged in prolonged physical exertion, are fasting or when you follow a strict low-carbohydrate (ketogenic) diet, your body will transfer from a 'sugar burn' to a' fat burn'. The liver then breaks fats down into fatty acids and glycerol, which can be converted back into ketones and glucose, respectively. Your body now enters a state of 'ketosis', a well-known phenomenon for people who have followed a ketogenic diet. It is also the state in which you are born as a baby and the state in which our early ancestors often found themselves, as they naturally dealt with extended periods without eating and their diet often consisted mainly of fats and proteins. Ketones are basically water-soluble molecules that are produced in the liver and enter the bloodstream when the body switches to fat burning.

The process of ketogenesis

During ketogenesis bodily fatty acids extracted from fat are turned into ketones, a process that mainly takes place in the mitochondria of liver cells. The liver can produce three types of keto bodies: acetoacetic acid, acetone and beta-hydroxybutyrate (BHB). Initially, acetoacetic acid is produced, which is then further processed into acetone and BHB. The keto bodies are transported via the bloodstream to various tissues. Acetone leaves the body as a residual product through the breath and urine. Hence, when you are in ketosis, your breath can temporarily smell like acetone. BHB, on the other hand, is an energy source that can be used efficiently by body cells. Slowly but surely we are learning more about this 'super fuel' of the body, but there is still plenty to discover!

Much research is being done into the effects of a ketogenic metabolism on the body. Some researchers suspect that the body prefers giving to the combustion of ketones, but since glucose burns faster and is easier converted by the body than other forms of energy, it is still the primary source of energy when present in our body. Bottom line, however: ketogenic 'fat burning' is more efficient than 'sugar burning', because on balance ketones deliver more energy and produce less waste than glucose. Ketones function as the body’s true premium fuel: a fuel marked by a clean combustion and which also benefits "engine maintenance".

*1 Floridzine belongs to a subgroup of the flavonoids, namely flavonols, which also includes quercetin. Flavonoids are antioxidants that protect cells and tissues from damage*2

*3 This health claim has not been submitted to the EFSA; more scientific research is needed to prove this effect