By: MegaFood
Be the first to review this product
Skip to the end of the images gallery 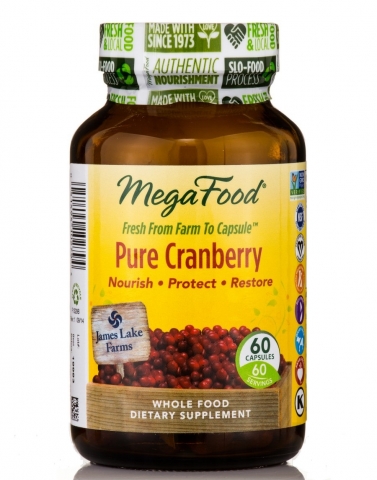 Long before superfoods like the goji berry and mulberry became popular, the originally North American cranberry was known for its superpowers. While not ubiquitous in Europe, in North America the berry still grows in abundance. The cranberry is packed with important vitamins and minerals. Take a handful of berries (100 grams) and you already have the daily recommended amount of vitamin C. Besides vitamin C, cranberries also contain substantial amounts of vitamins B5, B6, E and K, as well as the minerals manganese, copper and iron.

One of the best known health effects of the cranberry is the protective effect against cystitis. Extensive scientific research into the effect of cranberry on the bladder has shown that cranberries are full of what are called proanthocyanidins. This ensures that the Escherichia Coli (E-coli) bacteria, which causes cystitis, cannot adhere to the inner bladder wall. Though cranberry does not cure cystitis, a daily serving of fresh cranberries, cranberry juice or cranberry tablets appears to help prevent it. Cranberry has still other advantages. The berry’s antioxidants have a positive effect on the heart and blood vessels, the immune system and associated defense mechanisms. For example, it offers protection against free radicals in the body.

Used as a medicine for centuries

As mentioned, the cranberry originally hails from North America, where the medicinal power of the berry was widely known to Native Americans. The berry was widely used, including for the treatment of arrow wounds and as a remedy for cystitis. On long sea voyages, the berry was used to combat scurvy. Several tales tell of a ship being wrecked in 1840 near the Dutch coast, resulting in a barrel of cranberries washing up on the beach of the Dutch Isle of Terschelling. From that moment the cranberries grew on the island. From the 20th century the cranberry was also commercially grown in the Netherlands.

What are Re-Natured® Foodstate Nutrients™?

MegaFood uses a unique and patented process to manufacture its products, resulting in Re-Natured® Foodstate Nutrients™. Rather than simply mixing nutrients together, this technique ensures that nutrients and plants are linked through a natural growth process and undergo biotransformation. Because nutrients are not isolated, but have the nutritional structure of food, the body can better recognize and absorb the substances.

About MegaFood - Fresh from farm to tablet

MegaFood aims to improve people's lives through wholesome food supplements with natural ingredients. Founded in 1973, MegaFood has been a pioneer in the supplement industry, and its vitamins and minerals made from natural food sources continue to be among the best available. Products are produced without heat, such that all main nutrients remain intact. The company is unique, not only because it manufactures its own concentrates, but also because it purchases its products from local farmers and family businesses. Thus, MegaFood has control over every aspect of the production process and can truly live up to its slogan, 'Fresh from farm to tablet'.

Take 1 capsule per day. Can also be taken on an empty stomach without food.