By: Marine Healthfoods
Rating:
100% of 100
1  Review Add Your Review
Skip to the end of the images gallery 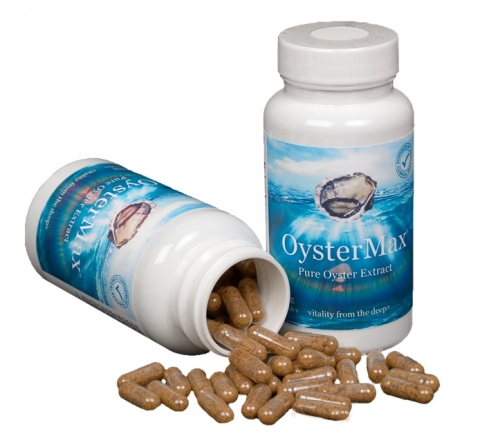 OysterMax® - Oyster Extract
Skip to the beginning of the images gallery

OysterMax® is a unique extract of oysters that grow in the clean waters off the Irish west coast. Each container of 120 capsules contains the equivalent of 6 kilos or 60 fresh oysters

The oysters in OysterMax® have been specifically selected during harvesting because only the oysters with the highest amounts of trace elements are being used. Oysters are the world's best source of natural zinc.

The problem with synthetic zinc supplements

Vitamins and minerals in natural food sources are always accompanied by cofactors and other nutrients that ensure a certain balance. Because oysters contain all cofactors of zinc in natural balance, there is no risk of disturbing the body's native mineral balance.

A harmonious biochemical status is essential for optimal living!

Cofactors such as manganese, copper, and selenium are of great influence to the function of zinc. Taking zinc as a stand-alone supplement is potentially dangerous as shortages of these other elements may arise as a consequence.

In contrast to synthetic supplements the trace elements and minerals in OysterMax® are naturally bound to carrier molecules such as peptides and amino acids. As a result, they are rapidly absorbed and can be used by the body immediately.

All nutrients in OysterMax® have a natural animal origin. This is 100% bioavailable and absorbable natural product.

The role of zinc in the body

Along with all other micro-nutrients in OysterMax® zinc, among other functions, is responsible for the building blocks of more than 300 enzymes in the body. Offering 4 mg zinc per 4 capsules this natural dietary supplement provides a safe amount to supplement the daily diet.

OysterMax® oyster extract is produced from carefully selected oysters in the clean waters of the Atlantic Ocean west of Ireland. The waters in this area are constantly monitored by the Irish Department of the Marine. Many oyster extract products come from Asia, where quality checks of the waters are not nearly as strict as in Ireland!

OysterMax® oyster extract is produced in a qualified manufacturing facility in Ireland that meets all the stringent Irish and European requirements and checks. In contrast to most other extracts, OysterMax® is not produced by use of a freeze-drying process. The unique and secret process that is used ensures that nutrients are not damaged or destroyed.

Other oyster extracts consist mainly of glycogen starch. In OysterMax® glycogen has been removed leaving only a pure extract.

In France OysterMax® has been used for more than 10 years as an aid in specific and radical therapy settings. The Cellular and Microbiological Unit of the French army is doing experiments to see whether OysterMax® might be a valuable supplement for soldiers exposed to battlefield stress.

Dr. Stephen Cunnane is an expert in brain development and evolution. According to Cunnane, the brain-specific nutrients found in high concentrations in marine products are precisely those responsible for primate and mammalian brain development. In a relatively short evolutionary period brain size changed from a mere 650 grams (Homo habilis) to 1490 grams (Homo sapiens).

Our ancestors settling in coastal areas had access to an unlimited buffet of protein, omega-3 fatty acid-rich and mineral-rich food sources that were fairly easy to obtain from the sea. Topping the list of primeval seafood is the oyster, with its unprecedented nutritious composition.

Take 2 up to 4 capsules per day, preferably between meals.

Allergens
Crustaceans or Molluscs
Instructions
Storage: see label. Keep out of the reach of children. Consult an expert before use in case of pregnancy, breastfeeding, illness or medication.
Write Your Own Review
Customer Reviews