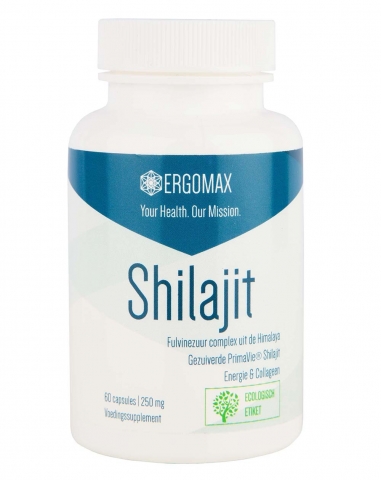 Shilajit - Primavie®
Skip to the beginning of the images gallery

Ergomax Shilajit contains patented PrimaVie® shilajit. Shilajit is a natural and nutrient-rich biomass extracted from rocks in pristine areas of the Himalayas. Shilajit contains a wide variety of unique and bioactive components that support multiple bodily functions. PrimaVie® shilajit is a patented, standardized and highly pure shilajit concentrate. It is standardized to at least 60% fulvic acid.

Shilajit is also known in India as the 'Destroyer of Weakness' and also belongs to the category of adaptogens. Since shilajit consists of dozens of physiologically active components, it evidences a powerful synergy as seen only in nature. Shilajit shows a wide spectrum of effects throughout the body. There are, hence, various indications of use and target groups, from athletes to elderly persons.

What people in India have known about shilajit for centuries is slowly becoming known in the rest of the world. For example, Olympic athletes and special forces from the former USSR used shilajit to become more robust and resilient. In the Western world, where shilajit is now gaining fame, scientists have mapped the composition of shilajit. Shilajit contains dibenzo-α-pyrones, chromoproteins, fulvic acid, humic acid, as well as over 40 different minerals.

The origin of shilajit

About 50 million years ago, the then Indian continent collided with Asia, forming the Himalayas. During the formation of the mountains, tropical forests were crushed and compressed between the boulders. Shilajit is the organic material formed in this rhizosphere: the thin layer where living roots and micro-organisms interact. Micro-organisms in the soil ('soil-based microorganisms') consume the decayed plant material and have created shilajit over millions of years, with important molecular components such as fulvic acids and minerals. The compressed biomass, shilajit, seeps out of the rocks as a tar-like substance during the warm summer months: a liquid ancient supplement with extraordinary potency.

Just like Shilajit itself, specific shilajit components are also becoming increasingly well-known. Fulvic acid is a natural electrolyte that facilitates various biological reactions. Electrolytes can conduct electrical impulses within cells and thus optimize the electric potential of cells. Other primary components of shilajit are what are called dibenzo-α-pyrones and dibenzo-α-pyrone chromo proteins (DBPs). DBPs are found in our mitochondria and blood, where they are active in the electron transport chain, along with CoQ10/ubiquinol.

The binding capacity of shilajit

Shilajit was originally also described as yoga vahi (‘co-carrier’). Freely translated, this meant that everything taken at the same time as shilajit was well-absorbed. Shilajit binds to other bioactive molecules and transports them through the body. This applies to nutrients and food supplements, but also, for example, to oxygen. A well-known combination is shilajit with ubiquinol or CoQ10.

Variability in quality of shilajit

Standardization and purification of shilajit is necessary for reliable effects and safe use. These principles create an optimal and standardized product, free from undesirable impurities. Ergomax only uses purified PrimaVie® shilajit. This is standardized at a minimum of 60% fulvic acid.

Do not use shilajit if you have sickle cell anemia or hemochromatosis, or if you are pregnant. Discontinue use if an allergy to fulvic acid occurs, which may involve a rash or dizziness.

At Ergomax we believe that everyone should be able to pursue optimal health. We help by offering natural food supplements in combination with professional guidance. We spend a lot of time and care on research into new and unique compounds and products with proven effects. All to meet the high expectations of our customers. All products from the Ergomax product line have been carefully selected and tested. Products and raw materials are as natural as they come. Mother Nature always knows better, we like to say.