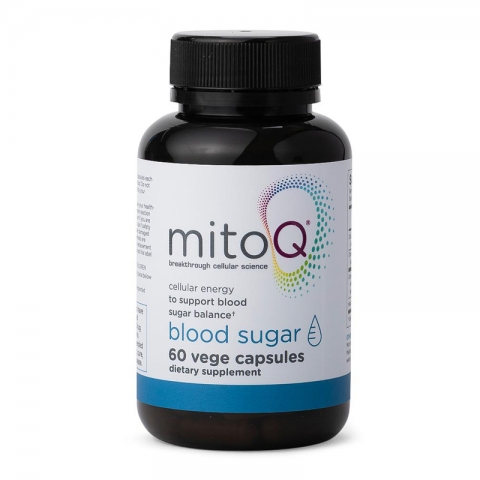 MitoQ is a revolutionary CoQ10 supplement with the patented Mitoquinol Mesylate as the main ingredient. Mitoquinol Mesylate was developed by MitoQ® based on years of research and is a shortened and positively charged version of coenzyme Q10. In this product this substance is combined with chromium, which helps to keep blood sugar at normal levels and which supports normal metabolism; as well as zinc, which has an antioxidant effect and contributes to a normal carbohydrate metabolism; finally with an extract of cinnamon bark, which too helps maintain healthy blood sugar levels.*

MitoQ's mission and vision is perfectly summed up in the following quote from the ancient Greek philosopher Herophilus: “When health is absent, wisdom and art cannot manifest, strength cannot land, wealth becomes useless, and intelligence cannot be applied." MitoQ is a unique modified version of CoQ10, which has been optimally developed according to the latest scientific insights and can provide the most active form of coenzyme Q10. MitoQ, or mitoquinol, was discovered by scientists looking for substances that affect mitochondria. More than a decade, $50 million in research and 200 publications onward, this proprietary supplement is now available to everyone. Various MitoQ formulations come in capsule form. In addition, MitoQ also developed a series of creams.